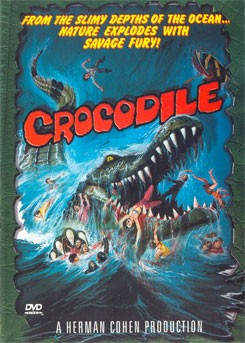 Filmed in Taiwan, Crocodile is a horror film about an oversized crocodile that terrorizes a town, attacking the inhabitants every three days.

Although production utilized a mechanical crocodile for many of the scenes, live ones were also used within miniature sets to simulate the massive size of the fictitious animal. In one such scene, a live crocodile is slashed with a knife. Blood spurts, revealing that the animal used was either alive or recently killed.

AHA attempted to contact the film's distributor, Cobra Media, regarding the animal cruelty but our inquiries were unanswered. AHA rated Crocodile Unacceptable.