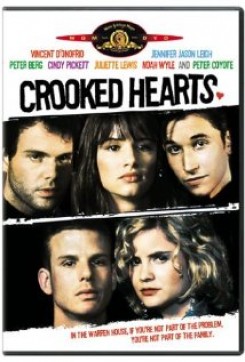 Crooked Hearts is a melodrama about the disintegration of the Warren family. The oldest son, Charlie, although in his mid-twenties, still lives at home. He's deeply troubled and prone to sudden temper outbursts. He has a difficult relationship with his father, but he refuses to leave home saying, "This family is like a drug and we're all junkies". Each of the family members seem troubled in some way. Another son, Tom, drops out of college just short of graduation and moves back home. The only daughter, Cassie, has an overwhelming urge to fall asleep at the first hint of any emotional turmoil. The Warren's youngest son, Ask, is idealistic and has developed a list of rules for living. This proves fatal for him in a freak accident that occurs while he is trying to save his father from the embarrassment of an extra-marital affair. Many aspects of human and family relationships are explored in this melodrama. At times they seem to be too contrived but there are some gripping moments and good performances.

In an effort to bring the family closer together, Cassie brings home a puppy that she's adopted from the local pound. During a highly emotional scene, she runs into the bathroom with the puppy as though she is going to flush him down the toilet. (Something she'd been told people do.) She doesn't but breaks down and cries while the puppy just stares at Cassie. The puppy appears as a much happier companion in later scenes. Other animal action takes place in a scene filmed at the Vancouver Aquarium where whales are seen swimming in the background. The British Columbia S.P.C.A. was present during the scenes involving the puppy. The whale scenes were filmed under the auspices of the Vancouver Aquarium who ensured that no undue stress was imposed.