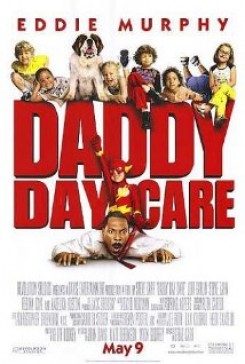 Charlie (Eddie Murphy) and Phil (Jeff Garlin) are two fathers who lose their jobs, forcing them to take their sons out of the exclusive Chapman Academy and become stay-at-home fathers. Being unemployed longer than either of them expected, the two dads open their own day care facility. As "Daddy Day Care" starts to catch on, it launches them into rivalry with Chapman Academy and its tough director (Anjelica Huston) who has driven all previous competitors out of business.

In the beginning of the film, one of the children, Max, holds a dead mouse by the tail and walks around the playground with it, then throws it into a trashcan. The dead mouse was a prop. In another scene, Phil hits a beehive on the porch, bees come flying out of it and he sprays it with the hose. The beehive was made by production and a computer generated the bees.

A very cute scene in this film was when the kids bring their pets into Daddy Day Care for show and tell. We see different kids sitting on chairs holding various animals. There is a large bunny, a tortoise, a parrot, a St. Bernard, and then a tarantula that crawls on Phil's head. The trainers familiarized the children with the animals before filming began. All of the animals were comfortable being handled and comfortable in the scene. The big St. Bernard loved hugs from the kids.

At the end of this scene, the dog is shown lying on the couch by the kids. It was hard for the trainer to retrieve him afterwards! All of the kids sat on a couch and watched as one child sat on a chair, holding an animal and talking about it. The child sat on a chair and a trainer handed the animal to the child or placed it next to the child. The trainers stood just off camera and retrieved the animals after the scene was over.

When the child had the spider, it was a fake one. The tarantula that crawled on Phil's head was real, but the actor's head was not. A Styrofoam head was made and put on a special stand that duplicated the real actor's head movements. The real tarantula was put on the fake head by a trainer. This was filmed in front of a green screen and edited into the film during post production.

The fundraiser to get Daddy Day Care up and running features a carnival with a petting zoo. There are several different animals, including ducks, llamas, goats and sheep in a corral and a pony ride off to the side. One of the children, Jennie, opens the corral and the animals begin to exit roaming all over the grounds. There are food booths set up with various foods displayed on tables and the mischievious Jennie manages to pour some roaches on bowls of beans and potato salad. We see some goats on top of a table eating pies and watch Phil being chased by a couple of llamas and sheep. Ducks and chickens are seen in the background.

For the scene, a small corralled area was set up and the animals were placed inside by the trainers. The animals belong to a petting zoo and are familiar with the corral as well as people entering and petting them. The kids and the extras playing their parents were all introduced to the animals before hand. Trainers doubled as actors during this scene and at least one was in the corral at all times. Trainers set up a puppy pen with buckets of grain about twenty feet from the corral and a trainer stood off camera near the gate when the actress opened it. The younger animals exited the corral first, followed by the older ones. The animals were never actually loose as six trainers stood off camera as well as a Border Collie named Jesse. Jesse was there to help herd any animals that might decide to wander. None of them did - they all ran into the puppy pen to receive their grain reward.

The actress playing Jennie had a cookie tin full of fake roaches that she dumped onto the potato salad and baked beans. Then in a separate shot, a trainer released 15 live roaches from a hole behind the tent into the potato salad and beans and they crawled around nibbling on the food. The roaches were removed from the food by the wranglers who stood off camera in case any began to scatter.

Two goats were placed on top of a table and held by trainers until the camera began to roll. The pies were set down and the trainers released the collars of the goats and ducked down under the table. The goats began to nibble on the pies and were retrieved by the trainers afterwards.

Six ponies were connected to the pony sweep and were experienced with the ride. The kids who sat on the ponies had lots of practice so they were comfortable and each pony was equipped with a seatbelt for the child.