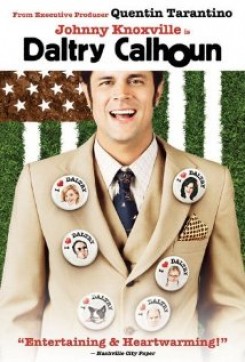 In Daltry Calhoun, a self-made man (Johnny Knoxville) struggles to keep his crumbling golf empire afloat while coming to terms with the reappearance of his estranged daughter, June (Sophie Traub). Daltry is ill-equipped to be the father of the 14-year-old music prodigy, who shows up at his door accompanied by her terminally-ill mother—and completely unaware of her true relationship with him.

During the opening scene at Aunt Dee's (Beth Grant) house, various chickens can be seen in the background. When Dee drives up, the chickens move out of the way. Production rented a local home in Tennessee for the filming of this scene. The owners left their chickens at the location, stopping by twice a day to feed and care for them. A member of production familiar with the care of chickens was in charge of keeping the birds out of harm's way by placing food in safe, out-of-the-way areas.

When a rooster ventured out of the woods as Daltry's truck sped up the driveway, our Safety Representative intervened to make sure that in future takes, production moved the chickens back to their area across the creek and gave them some corn to keep them happy and in place.

Although this footage didn't make it into the theatrical release, our Safety Representative on the set also monitored Dee's dog "Pickle" in the opening scene. The Yorkshire terrier jumps out of the car and runs into the house when Dee pulls up. Grant had been instructed on how to safely drive the car, hold the dog, and set him down.

Later in the film, Dee is eating on her porch with Pickle in her lap. When Dee starts choking and falls to the floor, the dog jumps down and runs off. When the actress "choked", she sat Pickle down on the porch floor and the dog was called into the house by a hidden handler. A second trainer stood off screen next to the camera to step in if necessary.

When Daltry and June talk on the lawn about getting June a new dress for the recital, a dog briefly appears in the background. This scene was also filmed at a local residence, and the dog was a member of the property owner's family.

When June follows Daltry as he enters the sporting goods shop in town, a couple can be seen walking a dog in front of the store. Later in the film, as the town marvels at Daltry's victory golf swing, a woman walks a small dog and passes a jogger. In both cases, extras with their dogs were used to perform this mild action.

According to the Safety Representative monitoring the set, this production was extremely cooperative and responsive to all of her recommendations. In fact, after thanking the Safety Representative for her time, the second assistant director asked if she could appear in the background of a scene wearing her American Humane Association uniform! Alas, an early flight prevented her from participating, but American Humane applauds the production's interest and collaboration with our work to protect animal actors.