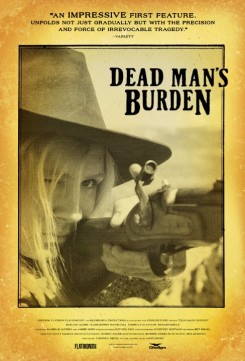 In post-civil war America, a lawman returns home to set things right when a man is killed.

American Humane Association Film & Television Unit monitored this film. However, the film has earned a Monitored-Special Circumstances rating due to an unfortunate incident involving a goat who died of pneumonia. According to the on-set vet, the goat was sick for days before filming started and although being treated, died soon after filming began.

Since this is a Western, there are a lot of scenes involving horses. All horseback riders were stunt riders or experienced actors who were skilled at riding, mounting and dismounting. All running/galloping scenes were well choreographed, and actors used caution while on and near animals. Whenever horses were seen tied to posts/fences, they were attached to lead ropes tied to posts.

In the scene where an actress shoots a rifle and you hear a horse wailing in the distance, the horse wasn’t located anywhere near the gunfire and the sound of the wailing horse was added in post-production. Anytime actors appear to shoot at or near animals, either the action was pantomimed (with no actual bullets) or powder blank quarter loads were used. Trainers used various cues to get the horses to rear, prance or appear startled by gunfire.

In the scene where chickens wander on or near the chicken coop, trainers placed the chickens on their mark and placed feed at their feet to keep them in position.