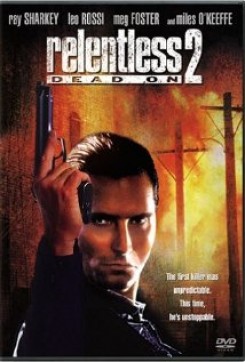 Dead On is taut, well-directed whodunnit. L.A. Police Detective Sam Dietz investigates the gruesome murder of a man. The man was slashed, strangled, and afterward, the murderer smeared a symbolic message on the wall with the victim's blood. When it's determined the murder is the work of a serial-killer, the FBI is brought in, and Dietz is introduced to his partner, Agent Kyle Valsone and a friendly conflict develops between the pair. In all, twenty-three murders have been committed and the murderer has left no substantial clues. Sam grows suspicious of Kyle when he finds the FBI is not telling him all the facts in the case. He learns that all the victims had new identities as part of a federal witness protection program. When Sam goes public with his distrust of Kyle, he's suspended but decides to continue the investigation on his own.

A hotel cleaning woman keeps her large dog with her for protection. As they enter a room, they interrupt a murder in progress. The dog attacks the murderer and in the struggle, the dog is thrown through a glass window, presumably to his death many floors below. (The long fall and landing is not shown on film.) An American Humane representative was present for both the training and filming of this scene. The dog had been trained to jump up and then off a seven-foot wall, and also prepped to go through candy glass. He was also trained to attack and release on command. For the actual filming, the scene was shot in numerous cuts and edited together later. Although the window appeared to be high, the dog landed just below the sill, out of camera range.