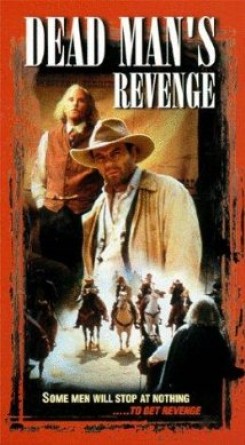 Set in Rawlings, New Mexico, in the early 1900's, A Deadman's Revenge is the story of how one man, Luck Hatcher, tries to destroy Paton McKay, the man responsible for having him put in jail unjustly and killing his wife and young son.

McKay, an evil, heartless man, is forcing people from their homes, by forging deeds to their property or setting them up in illegal doings for his own monetary gain. One of these families are the Hatchers. Mr. Hatcher has refused McKay repeatedly to give up his land. McKay plants one of his horses in Hatcher's corral and has his arrested and sent to prison for horse stealing. As Luck rides off with the sheriff, McKay enters the Hatchers home and kills Molly, Luck's ailing wife, and shoots Tom, their ten-year-old son as he runs from the house.

Some 12 years later, hatcher has escaped from prison and has sworn revenge on McKay. McKay has a $3,000 reward placed on Hatcher's head. Several bounty hunters are after Luck for the reward, but there are two men inparticular who have interest in being the ones to find him, Jessup and Bodine. These two lock horns several occasions in their search for Hatcher. They both have ulterior motives, though. It seems that Jessup is in cahoots with Hatcher to fake his death and collect the reward, while Bodine is actually a US Marshal who has taken the name of Bodine, as he is really Luck's presumed dead son, Tom Hatcher, only in search of his innocent father.

All find out about the others true identity and together devise a plan to bring McKay to justice.

Horse action is throughout in this period piece, and all mild. Horses are seen being ridden, corralled, fed, and in background scenes. No special action was required by and of the horses. In one scene a rattlesnake is seen, coiled with his tail rattling. Tom supposedly shoots it then picks up the dead snake and throws it out from under the train car. This scene was shot in cuts.