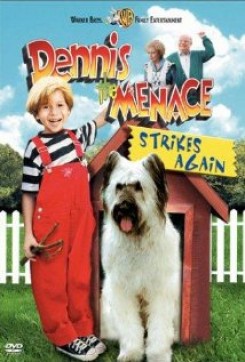 Dennis The Menace II is a sequel to the original film version of Dennis The Menace. In this rendition, it is Mr. Wilson's birthday and Dennis has something very special planned. Dennis wants to give Mr. Wilson one of his pets. Not being able to decide which one, Dennis loads them all into his wagon and takes them over to Mr. Wilson's house and up to his bedroom. As one would imagine, all of the little creatures get out of their cages, causing pandemonium and leaving Mr. Wilson screaming for Dennis' parents.

In one scene, where Dennis places his pets, cockroaches, snakes, frogs, mice, rats, a lobster, turtles, and spiders, into the wagon and then proceeds to Mr. Wilson's house followed by Ruff, his dog. When he arrives at Mr. Wilson's house he continues to pull his wagon full of pets up the stairs, towards the bedroom. This scene was shot in several cuts. All of the animals were placed in cages or plastic aerated containers and, a camera on a dolly passed by the critters as Dennis holds the frog in his hand. As a safety precaution, the child actor's hands were thoroughly cleaned before handling the frog. When the wagon is pulled up the stairs, the rat is on the top of the pile in a cage. The cage, which contained the rat, was secured tightly to the cage below. The dog was a safe distance from the wagon with several trainers strategically placed around the perimeter as the actor pulled it up the steps. The trainer cued the dog with verbal commands. After entering the bedroom something startles Dennis and he knocks over the menagerie of animals. The frog escapes and hops into the bathroom and into the tub where Mr. Wilson is taking a birthday soak. The frog lifts its head out of the water and sprays Mr. Wilson in the face. While this is taking place, Dennis, unsuccessfully, is trying to catch the critters and put them back into their containers. This scene was shot in cuts. Real animals were used for the establishing shot. Fake animals were placed in the containers when they are seen being knocked over. For the shots of the critters roaming around on the floor, each animal was shot separately, the trainers placed the animal on its mark in the direction that it was to travel and retrieved it at completion of the shot. The snakes were placed around the bedpost by the trainer. As Mr. Wilson gets out of the bathtub, he grabs a towel and an Iguana is hanging onto it. When he comes out of the bathroom, a small alligator bites his foot and he falls into the wagon and it rolls toward the staircase. He clutches the railing with his hand and a bee lands on it, stinging him. He screams and lets go which plummets the wagon down the stairs. As Mr. Wilson lies dazed at the foot of the stairs, the critters are seen making their way down the steps. Dennis lays the frog on Mr. Wilson's chest. This scene was shot in cuts. The trainer placed his foot in front of the alligator and tapped its muzzle to encourage it to open its mouth. He then moved his foot to make it look as if he were struggling with the animal. Real, fake, and computer-generated animals were used. Real animals were used for the establishing shots and were replaced by fake ones or computer generated. The bee was computer generated. When Mr. Wilson pulls the mouse out of his pocket, the actor gently held the mouse by its tail to establish the shot. The Iguana was placed on the towel and then replaced with a fake one when the actor grabs the towel, supposedly flinging the Iguana off of it. There is a scene where Ruff is dressed as a giant bug and Coodles, Margaret's cat, wears a tutu. When the cat sees the dog it screeches and the chase starts between Ruff and Coodles. The dog pursues the cat through the yard, up Mr. Wilson's front steps, into the house and up the stairs to the attic. When the animals come rushing into the attic, they startle Mr. Wilson and he falls out of the attic window. This scene was shot in several cuts. The animals were filmed together and separately. To insure the safety of both animals, the dog was always on a leash when the animals were filmed together. Trainer #1 released the cat and trainer #2 cued it with a buzzer and a food reward to point B. Trainer #1 released the dog and trainer #2 cued it with verbal and hand commands to point B. The tutu was loosely tied around the cat's abdomen for adequate freedom of movement. When Dennis attempts to wash his grandfather's car, he accidentally pours pink cotton candy mix into the electric car washer instead of detergent. The dog and Dennis, along with everything in sight, gets covered with cotton candy. When the dog is seen licking the soap/cotton candy off of the car, he is actually licking baby food that the trainer placed on a clean area of the car. The soap/cotton candy mixture was non-toxic and the dog was immediately rinsed off after the shot was completed. The dog was prepped with the machine before shooting and was well accustomed to the noise and movement. Other animal action consists of the dog walking with Dennis and his friends, sitting in or outside of the clubhouse, standing and placing his paws on a car etc. For all of these scenes the trainer placed the dog on his mark and cued him with verbal and hand commands with a food reward. The cat wears several different outfits throughout the film. The trainer fitted the cat with the loose fitting outfits and then placed it on its mark.