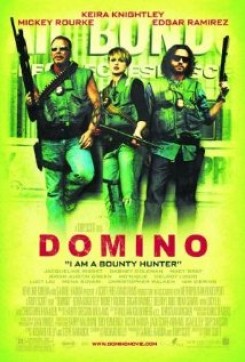 Keira Knightly stars in this multi-tiered crime saga inspired by the real-life story of bounty hunter Domino Harvey, ex-Ford model and privileged daughter of British actor Laurence Harvey. Once considered one of the most glamorous faces in the world, Domino rejected her pampered position in the limelight to immerse herself in the seedy business of tracking down wanted fugitives.

In a scene that takes place in a house trailer, a woman unleashes her ferocious pit bull "Chi Chi" to attack Domino. Shots are fired, creating a gapping hole in the trailer's floor through which the dog falls, hits the ground outside, and then runs away whimpering.

This sequence was filmed in several different cuts. One trainer, hidden behind the kitchen counter, released the dog's leash while a second handler standing just beyond the camera in the living room cued Chi Chi to speak and come to her for a food reward. Puffs of smoke from a mechanical smoker were used to simulate gunfire.

For the drop through the floor, trainers loaded the dog in backwards through a specially-made chute underneath the trailer, and the pit bull jumped down as though falling through. Dirt and debris made of light balsa wood pieces were released as the dog jumped so it looked like the floor was breaking apart. Chi Chi then ran to a trainer waiting off camera.

A montage of childhood memories depict happier times for Domino, showing her and Dad at the beach as their dog carouses in the surf. Rufus, the dog used in this scene, loves the beach, and trainers were standing by just out of frame as the actors threw a ball into the water for Rufus to retrieve.

In another flashback, Domino's father wins her a goldfish at a carnival. All fish brought to the set for this scene were kept in a large, aerated container filled with purified water, and the supplier selected a few goldfish to put in each bowl displayed at the carnival booth. One fish was placed in a plastic bag with water and air, and the extra handed this bag to the actor when he won the goldfish.

Trainers also brought fake fish to the set and placed these in a plastic bag to be used in a later scene where Domino flushes the fish down the toilet.

American Humane monitored no other animal action in this film.