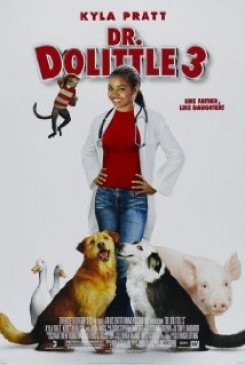 In this direct-to-video installment of the franchise, Lisa Dolittle (Kristen Wilson) sends her youngest daughter, Maya (Kyla Pratt), to a dude ranch for the summer to help the teen find herself. While there, Maya reluctantly uses her talent for communicating with the animals to enter a high-stakes rodeo that could save the cash-strapped Durango Ranch from being taken over by a neighboring competitor.

American Humane's Film & Television Unit monitored this film. Dr. Dolittle 3 is a Screen Actors Guild (SAG) production, and therefore it was required to provide our Certified Animal Safety Representatives on-set access whenever animals were used. During pre-production of the film, we received a copy of the script and the daily call sheets. American Humane's Safety Representatives carefully reviewed those materials to determine whether any scenes or situations appeared to put animals at risk. Representatives were then on the set to ensure that the animals remained safe throughout production.

This film met the Guidelines established by American Humane, received the Monitored-Acceptable rating, and was awarded the "No Animals Were Harmed"® End Credit Disclaimer.

While driving on a busy San Francisco street, Maya turns quickly to avoid hitting a dog in the middle of the road. An overhead shot shows the dog surrounded by several cars that have also swerved to miss it.

This sequence was filmed in multiple cuts using a stunt driver on a road closed to all public traffic. After positioning the dog on mark in the middle of the street, an off-screen trainer moved around the dog and called to him to get reaction shots and looks in different directions. In one take, a trainer cued the canine to cross the street while the stunt driver performed a controlled swerve at a safe distance from the animal. For the second part of this sequence, all other vehicles were put into their nearly-crashed positions and then trainers placed the dog in the center of this "chaos" to give the illusion that he'd been there throughout. Smoke emerging from car hoods was a special effect.

In one scene, a capuchin monkey at the veterinary clinic lies down for an exam. A trainer placed the monkey on the examination table and stood off camera using a combination of hand signals and verbal cues to maintain the down-stay position.

Later, this same monkey appears on a cherry tree branch in the backyard at a party. The capuchin throws cherries at the teen revelers and then jumps off the branch, runs over to the punch table and converses with Maya. A trainer positioned the capuchin on mark and cued it to hop up and down and throw fake plastic cherries. The monkey then jumped down on command and was retrieved by the awaiting trainer, who then verbally directed it to walk over to the punch table and hold position opposite Maya.

In one scene, the teens saddle up to ride, and Clayton's (Tommy Snider) horse collapses under his weight when he tries to mount it. Because the director wanted it to look like some of the kids were having problems mounting, the actors made the process look harder than it really was. The shot of Clayton's troublesome mounting was actually filmed in several cuts. Snider was filmed mounting and on top of the horse; in a subsequent shot, the trainer cued the horse to get down and stay as the actor climbed back on. The horse was then cued to get up and trot to an off-screen trainer.

Maya then accidentally mounts her horse backwards and rides off. Much preparation and rehearsal time went into this scene, and a stunt woman doubled as Maya for part of the action. When Pratt did the actual backwards riding, it was at a slow pace and accompanied by a mounted trainer riding alongside, who controlled the reins of her horse.

While the teens practice various rodeo activities, Clayton chases and catches a pig by its back legs, then releases the animal. Trainers "greased up" this porcine actor with chocolate syrup and mineral oil before placing it in the center of a circle of kids on the grass. Both Snider and the pig rehearsed this action extensively, and at times the pig was so relaxed it was difficult to get it to run for the chase scene! The Safety Rep on set inspected the yard beforehand to make sure it was safe and clear of any debris that could constitute a trip hazard for the animal.

A later scene shows the kids having an egg fight in the chicken coop. Trainers and actors rehearsed this scene extensively before adding in the animals, and the young actors were very aware of the placement of the chickens as they performed the choreographed fight. Two unseen trainers in the coop area held or shooed chickens out of the way as needed. Only fake eggs were tossed because of allergy concerns, and a fan blew feathers about to create the illusion of chaos. The Safety Rep monitoring the production called this the "nicest flock of chickens I'd ever seen."

The events at the Silver Spurs Rodeo included steer wrestling, barrel racing, calf roping and bull riding. Trainers worked extensively with the actors on proper animal handling before filming began, and for all of the intense action—the roping and taking down of calves, tying them up and bull riding—stunt doubles and wranglers performed instead of the teen actors. All of the animals used for this sequence were very well-rehearsed and accustomed to this type of rodeo action, and the extras in the arena pantomimed their cheering so the animals wouldn't become agitated by excess noise.

Each event was filmed in many separate cuts. The trainers would ready the animals by situating the ropes around their necks, laying them on mark on the ground, loosely tying their legs, etc., and then calling the actor into frame once the steer or calf was in position. When the bucking broncos leave the chute and enter the arena kicking and knocking the men off, experienced stunt riders replaced the actors.

For the barrel racing shots, Pratt rode the horse mostly at a trot in a traditional barrel racing pattern. Then a stunt double did the same pattern, riding the horse even faster. At one point the script called for the horse to knock down a barrel as it rides by, but the horse was so well-prepped for this sequence that it wouldn't knock the barrel over and the stunt double had to use her foot to knock it down!