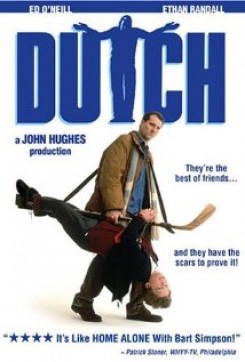 Dutch is a heart-warming story about a man named Dutch Dooley, who has made his own way in life and now has his own construction company. He is engaged to Natalie, a woman who was previously married to a blue-blood. Her son Doyle, a precocious thirteen-year-old in boarding school at his own request, has gradually grown distant from his mother and looks up to his father since the divorce. As it nears Thanksgiving Doyle's father advises Natalie that he will be traveling to Europe and will not spend the holidays with the boy. Natalie is thrilled, but knows that Doyle is not going to take the news well. Dutch decides to pick up Doyle from school and drive him back so that they may get to know each other, like it or not. They do not, and the story continues through their long journey home.

As Dutch is entering a party given by some of Natalie's friends a small dog rips at Dutch's pant leg. For this scene one of the dog's rag toys was attached to the actor's leg under his pants and the dog was merely playing tug-of-war with the actor. In another scene there are two horses walking across Natalie's estate as background