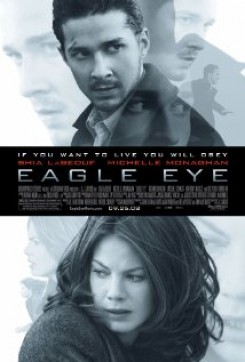 "No Animals Were Harmed"®

When a mysterious woman forces strangers Jerry (Shia LaBeouf) and Rachel (Michelle Monaghan) into performing illegal and dangerous stunts, turning them into fugitives, they must quickly work together to figure out who the blackmailer is and why they are being targeted.

At the airport, security guards walk through the crowd with K-9 dogs. For this brief and mild action, a costumed trainer led one of the dogs on a leash, and a few background actors led the other dogs. The cast and crew members were instructed on the dogs' proper handling beforehand. The dogs were always on leashes and trainers were nearby. A couple of the dogs were cued to "sniff.

In the desert, a person leads a donkey by a rope. The donkey was a pack mule accustomed to wearing a pack on its back. The actor who led the donkey was instructed on its proper handling before filming began. The trainer handed the donkey, which was equipped with a harness and lead leash, to the actor immediately before filming and stood nearby for this brief walk.

American Humane also monitored goats, sheep, horses and dogs in the desert scene, but they are not seen in the theatrical release. All animals were kept away from any debris on the ground.