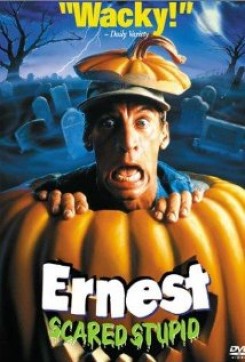 This family comedy is about how Ernest, the town's garbage collector, must save the world's children from the hideous "Trantor, the Troll". Many centuries ago Ernest's Uncle Finnius buried Trantor under a big oak tree for all of eternity, in order to save the children from the troll. However, the troll people placed an ancient curse on Earnest's family. The curse was that one day, out of sheer stupidity, one of his family would unknowingly release Trantor from his resting place to resume his reign of terror. Ernest does just this. He helps three children, Kenny, Elizabeth and Tommy, build a tree house. Ernest picks the very same oak tree Trantor was doomed to reside in and says the "forbidden words". Now Trantor is free!

Ernest has a pet dog, Rimshot, who is seen throughout the entire movie. In an opening scene Ernest is trying to pick up trash with a new contraption he has invented. He falls into the trash bin and would have been compacted, if it were not for Rimshot, who stops the compactor. This scene was shot in cuts. We see Rimshot pushing and pulling levers and honking horns. To accomplish this shot the trainer was on the floor of the truck moving the various levers to make it appear as if the dog was actually doing the stunt. The horn noises were dubbed in later. There are two scenes where Rimshot pulls on the actors' pant legs. For this the dog had been trained to play "tug-of-war" by his trainer. In one scene, while in pursuit of the troll, Ernest and Rimshot jump into the truck and take off down the road, only to discover that the troll is on the cab of the truck trying to kill them with a sword he is plummeting through the roof. For this scene the dog and the actor were positioned very carefully, with the dog being trained to stay on his cushioned box. The holes in the roof were made prior to filming so they would know exactly where the sword would come through. The sword used was made of plastic. Neither dog nor actor were ever in any danger. While the truck is still moving, Ernest jumps up on the roof of the cab and grabs the troll and they begin to brawl. While Ernest and the troll duke it out, Rimshot takes control of the wheel and continues driving down the road. This scene was shot in cuts. The dog's paws were placed on the steering wheel and the dog was placed on his box to raise him up so that he would be visible behind the steering wheel. When you see the dog "driving", the vehicle is not actually moving. The trainer is on the floor of the cab moving the steering wheel to make it appear as if the dog is moving the wheel. The dog is also trained to jump down off the seat and step on the gas and brake pedals. Whenever you see the truck actually moving during the fight scene, there is a driver operating the vehicle. While Rimshot is "driving", the troll jumps down onto the hood of the truck, takes a shotgun and blows out the front windshield. This was also done in cuts with the dog not actually in the cab when the windshield is blown out. There are many A to B scenes with Rimshot going to the front door, walking through the school auditorium, etc. In one scene Rimshot's ears stand straight up in fear at the sight of the troll. This was achieved by the use of very thin filament wire being attached to the tip of each ear with eyelash glue and the ears being raised by the trainer. In another scene, while at a Halloween party at the school, Rimshot is seen in a boyscout's uniform carrying a large stick in his mouth. In various other scenes Rimshot is seen barking, sitting, running, walking and sleeping. American Humane was not on this set filmed on location in Tennessee. The production coordinator did not notify AHA of the production and, as a result, was terminated from her job. However, after confirming all animal action with the trainer and production company, we are rating Ernest Scared Stupid "Believed Acceptable".