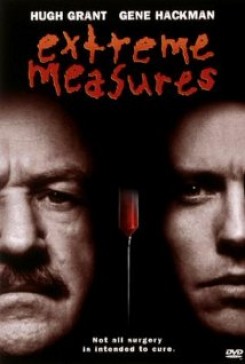 Extreme Measures is a medical thriller about Dr. Guy Luthern, an idealistic young doctor who loses a patient to an Unknown cause. When he starts looking into the man's death and possible causes, Dr. Luthern eventually uncovers a secret lab that uses the homeless as guinea pigs in their experiments. What he does not realize is that these people have powerful allies and in a split second start to ruin his life. The individual in charge of the lab has drugs planted in the doctor's apartment that were stolen from the hospital along with other hospital merchandise. His apartment is supposedly broken into and the police find the drugs. Upon his arrival home, Dr. Luthern is immediately arrested. He is also suspended from the hospital until his guilt or innocence can be proven in court. Now his only alternative is to expose the criminals in order to save his career and the lives of future homeless men.

There is a scene where a little girl is watching TV and a program is on about experiments on lab rats. One white rat with a broken tail is seen walking from A to B to a water bottle. Then two black and white rats are seen walking A to B. One of the black and white rats looks as if his back legs are paralyzed. He is seen dragging himself with his front legs. For this scene the production company leased stock footage from the NBC network from an actual news story. In another scene two dogs are seen being walked on leashes in the sewer by actors. There is also a scene where a fly lands on the doctor's hand twice. The second time, the doctor moves his hand and the fly is seen flying away.