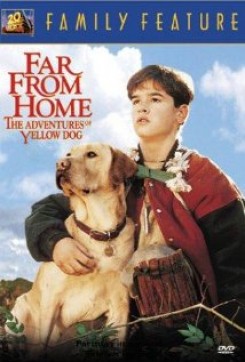 Far From Home: The Adventures of Yellow Dog

Far From Home: The Adventures of Yellow Dog is a warm-hearted adventure/drama blended with humor and enhanced by breathtakingly beautiful photography of British Columbia. The story centers around fourteen year-old Angus McCormick and his family who run a shipping business along the shores of a remote and rugged area of the Canadian province. Mr. McCormick is determined that Angus and his younger brother, Silas, have a strong appreciation and respect for the wilderness. The family take field trips together so that Dad can instill in his sons survival techniques to have should the need ever arise. On one of these trips, they find a Golden Labrador, apparently lost in the woods. It is obvious from the first sight that this is a dog with character and intelligence and the McCormick's bring the dog home so that they might find the dog's owner. They send out "Found" flyers, notify the authorities and make every effort to locate "Yellow's" (as they have dubbed him) owner. In the meantime, Yellow is having a great time playing with the boys, and vice versa. When no owner materializes, Angus convinces his folks (even the initially reluctant Mom) to let him keep Yellow. Angus and Dad have been planning a boating trip together, leaving Mom and the much younger Silas at home so that Dad can focus on imparting some sage advice to Angus on becoming a skillful sailor. They also plan to test the seaworthiness of a small boat that Angus has built himself. Yellow eagerly joins them and there is a beautiful shot of Yellow standing on the deck of the boat as it glides serenely through the vast expansion of sea. The serenity is short-lived as the seas become increasingly choppy and it's obvious that they are in for some really rough waters. As Dad radios the Coast Guard, in an attempt to give them their location, the radio suddenly goes dead. Angus is concerned that his boat is not sufficiently secured and begs Dad to let him go on deck and check on it. Dad doesn't want Angus on the open deck with the sea so rough, but, seeing Angus' concern, permits him to go saying "Wear your life jacket". Angus is no sooner on deck than a giant wave envelopes their small boat, which capsizes. The scene switches to Dad being rescued from the hull of his overturned boat, but Angus is not there, nor is Yellow. An alert goes out. Angus is lost at sea and many rescue teams begin a futile search. The targeted area is vast with a very treacherous, rocky, jagged and mountainous coastline. The camera pans to a remote area of that coastline where Angus and Yellow are sitting in the small boat which Angus had made and which he used to get them safely ashore. What comes next will test every survival skill that Dad has taught Angus as he and Yellow embark on a life-threatening adventure, an adventure where they must face danger, battle the harsh elements, confront wild beasts, and endure hunger and exhaustion.