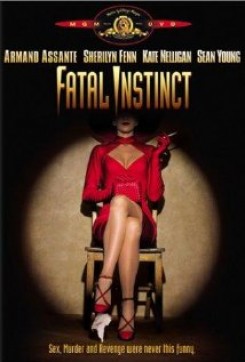 Fatal Instinct is a sexual farce about a woman, Lana, who is trying to kill her husband, Detective Ned Ravine, for the insurance money. Lana, who is having an affair with her car mechanic, Frank, devises a way to do away with her husband, Ned, so that she and Frank can collect the life insurance money. There is a catch though, Ned must be shot with a pistol, fall from a moving northbound train and drown in a fresh water stream in order for the insurance to pay off. Some hysterical predicaments develop for all involved as Lana tries to pull off her devious plan.

In a scene when Ned goes to a pet shop to buy Lana a pet, the saleswoman who approaches him has two large parrots on her shoulders. The parrots were merely placed on the actress' shoulders by their handlers. Other birds are also seen in the background. Ned decides to purchase a pet skunk for his wife. He takes the new pet home. Lola, a woman who is obsessed with Ned, kidnaps the skunk. She takes the skunk to an amusement park where she takes him for a ride on the roller coaster. This scene was shot in cuts. The real skunk, named Stinky, is a tame trained skunk. He was Filmed in a roller coaster seat that was on the set. A rear screen process was used to make it appear that he was actually on a moving roller coaster. Then a fake skunk was filmed riding in the roller coaster, holding onto the hand rail with eyes wide. The two scenes were then edited together. In another scene Ned goes to the medicine chest for an aspirin and when he opens the door of the cabinet, a cat jumps out. The medicine chest was made with a fake back which provided more than enough room for the cat. The cat was placed in the chest through the fake back by his trainer just prior to the shot, and when the door was opened, the cat jumped out and ran to his trainer, who was off camera. In one scene a small sparrow lands on the window sill of Ned's bedroom and starts singing, waking Ned who throws his shoe at the bird. This scene was also shot in cuts. The bird had been prepped for the scene. The actor was filmed throwing a shoe with no bird present, then a shoe was gently tossed out of the window to the side of the bird as the bird flew to his cage in response to verbal cues given by his trainer from off stage. The bird was comfortable with this scene and it caused him no distress.