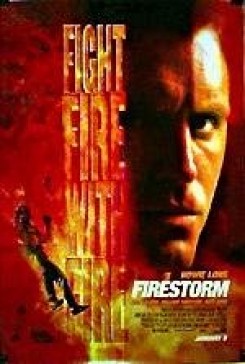 Firestorm is a film about a group of brush firefighters and how one of them risk his reputation and his fellow firefighters lives, for a chance to make some quick cash.

During a raging forest fire, fireman go into a house and rescue a family. However, it is not until they get away from the house and flames, that the mother realizes her little girl is missing. One of the firefighters decides to risk it all and go back inside for the girl. Knowing that he can not do it alone, his senior officer follows him inside. They find the little girl and her dog inside her dollhouse. As one man grabs the girl the other goes for the dog and the two men run towards the woods, covering themselves with a fire-retardent cover as a fire-plane flies overhead. When the group gets up they are seen shaking the fire-retardent off of themselves. The two men grab their wards and run for safety. An explosion is heard and a camper shell is blown in the direction of the firefighter and dog, trapping them underneath. This scene was shot in several cuts. When the camper shell is seen falling and hitting the actor, the dog is not actually seen. After the actor is lying on the ground, the dog is seen squirming out of his arms and walking away. For the segment of the dog shaking the retardent off of his fur, the trainer dipped the dog in the fire retardent liquid prior to shooting and placed him on his mark, giving verbal a command to "stay" and then to "shake".