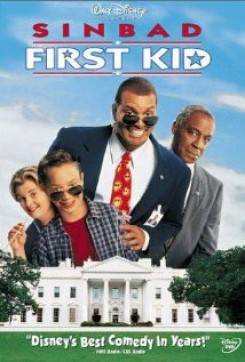 First Kid is centered around the child of the President and First Lady in The White House. Luke wants to have the freedom to do the things that a normal kid his age entering high school does. Of course his father's political position makes this a constant problem and hence the theme of the story. When we first see Luke, we are introduced to his loneliness as he logs in on the Internet checking for E-mail that he knows he doesn't have. He leaves a message asking for someone to chat with him after school. Woods is a Secret Service agent assigned to take care of Luke. We see him with Luke at the breakfast table as he tells the boy to finish his cornflakes so they won't be late again, but Luke is defiant and eats slowly making them ten minutes late. His mother comes in and faults Woods for the delay. Woods cannot call Luke a liar to his mother, so has to accept the blame as he has previously had to do. Luke is not well liked by the Secret Service and the job of protecting him is not considered easy, but irritating and unpredictable. Luke says good-bye to his snake, Poison, and leaves with Woods and his mother to go shopping for school clothes. In this first activity off White House grounds, a crowd gathers to watch mother and son shop. Agent Simms is part of the group of Secret Service men guarding the two. He checks out the contents of a suspicious looking bag of an onlooker in the crowd, making points with the First Lady. .She requests that he replace Woods and be assigned to guard Luke. This request, that the maverick Simms be assigned to guard Luke, surprises his superiors. Simms wears loud ties, does not wear his badge, eats donuts on the job, and in general does not conform to the external requirements of the job. Simms isn't too happy with the new assignment either as he was hoping to be assigned to protect the President. However, he regards this assignment as a necessary stepping stone. To initiate Simms, Luke throws his snake at him and it ends up around Simms' neck. The snake also disrupts a formal dinner and Simms ends up chasing it under the tables before it is captured. When Simms accompanies Luke on his first day at prep school, a predictable fight ensues with the school bully, Rob, and Luke loses the fight. Simms suggests they develop a disguise for Luke so the two of them can sneak outside the grounds and Luke can do some of the things he would like to do. First on the agenda is a secret outing to a boxing gym where Simms had once trained. Luke learns the basics of how to defend himself, and after a few trips to the gym, he and Simms develop a trusting friendship. A cute blonde, Katie, at school, shows an interest in Luke and Luke is also interested in her. When Rob, who also likes Katie, picks another fight with Luke at school, Luke is prepared and wins the fight. Luke next convinces Simms to help him sneak out, in the disguise he has developed, to an ice-skating birthday party for Katie. He is having a great time just being an ordinary kid. When the President and the First Lady return from a trip, they notice this happy change in Luke so they give him permission to go to an upcoming school dance where he will be able to dance with Katie. Simms, naturally, becomes his dancing instructor, but disappointment occurs the evening of the dance as a suspicious package is found outside. The White House and the Secret Service cannot allow him to attend the dance. Nonetheless, Luke convinces Simms to sneak him out. As a cover, Luke uses the recorded voice on his computer to answer whenever anyone knocks on his bedroom door. Luke is a great success at the dance, but he and Simms are discovered as they return to The White House where the Secret Service has discovered the computer scam. Simms is dismissed at once and not allowed to say "good-bye" to his friend. Luke is lonely once more under the strict guidance of the Secret Service. He relies upon the Internet for companionship. His Internet friend, Robert, suggests they meet at the mall and play computer games together. Luke agrees and sneaks out to the mall. His disappearance is quickly discovered by the Secret Service and Simms is called in to help locate him. Earlier Simms had given Luke a necklace with a peace symbol, complete with a secret way to locate someone. It works. Luke is located with Robert Woods, his former agent who is drunk. Woods is intent upon returning the kid in order to show how inefficiently others have guarded him, thereby hoping to get his old job back. Simms confronts him in a fight. He shoots and wounds Woods, but Woods also shoots and wounds Simms. Upon recovering, Simms is rewarded by being assigned to guard the President, but he declines, rather asking to remain as an agent to Luke, "the first kid," just a regular kid now and no longer "the kid from hell."

Animal action consisted of a snake and dogs. In the initial scene between Simms and Luke, Luke taunts Simms with his pet snake, Poison, a six foot boa constrictor. Luke ends up tossing the snake to Simms who appears to catch Poison. Simms ends up with the animal draped around his neck, but then places the snake back in the terrarium. For this scene, a real and a fake snake were used. The actor playing Luke was prepped by the trainer and was comfortable holding the real snake. When the snake is actually tossed and draped around Simms' neck, a fake snake was used. The terrarium was actually the holding aquarium for the snake on set. It was a ninety gallon aquarium which the trainer maintained throughout filming for the comfort of the animal. We see more of Poison at a White House dinner when he gets loose and slithers around under chairs and tables. Eventually, the snake crawls up the leg of one of the female guests. This scene was shot in cuts. Only actors who had no fear of snakes were used as guests and the woman whose leg was filmed was prepared prior to shooting so that she would not act eratically and disturb the snake. The trainer placed the snake in various locations throughout the room and near the actors. When we see the snake appear to crawl up the leg of the woman, the trainer was just out of camera range guiding the snake. First, the trainer gently touched the snake's body to get it to move forward between the woman's feet. In a second shot, the snake was wrapped, by the trainer, around the leg of the actress. In editing, it was made to appear as if the animal slithered right up her leg on its own. Before Simms is assigned to guard Luke, he is in a mall looking for a Dunkin' Donuts shop with Dash, a newly recruited Secret Service agent. Simms borrows a K-9 unit dog named Rocky and takes him on a leash with them to the donut shop. Rocky growls at the donuts. For this scene the dog was visually cued by his trainer to bark and given food rewards. The mouths of the dogs of this breed, the Belgian Malinois, have a natural snarl-like look when barking. In post production, the sound of growling replaced that of the bark to achieve the effect needed in the scene. In a later scene, we see Luke with his dog, Brandy, a bearded Collie, going for a walk on the White House grounds. The dog appears to touch the fence and an alarm goes off. A K-9 guard dog appears, barks at Brandy and Brandy whimpers. This sequence was shot in cuts. The Collie was given verbal and visual commands by his trainer and went to a specific mark. The sound of the alarm was added in post production. When the guard dog appears and barks at Brandy, the dogs were filmed separately and the wrought iron fence separated them. The guard dog was visually cued by his trainer and ran from point A to point B, stopping on one side of the fence and barking. The Collie was filmed separately on the other side of the fence and the sound of the whimper was added in post production.