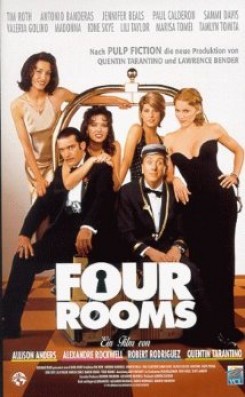 Four Rooms is an anthology of four short films, set in four separate rooms of the once grand L.A. hotel, Chateau Marmont. The four segments all take place on New Year's Eve. The responsibilities of running the hotel and taking care of the patrons needs all lie on the shoulders of Ted, a hyper, inexperienced new bellboy. In the first segment, "Strange Brew", a coven of witches checks into the honeymoon suite to resurrect their goddess, Diana, a 1950's entertainer-stripper. There is Athena, a gypsy like high priestess, the sexy Elspeth, who arrives with her girlfriend, a juvenile delinquent on probation, the novice Eva, along with Raven and Jezebel. Each witch brings human body fluid to the gathering, except for Eva who accidentally swallows her contribution of semen. The witches cannot complete their spell without the fifth contribution. Therefore, they give Eva one hour to get some more. They also offer Ted, the bellboy, fifty dollars to make Eva stop crying. Little does he know when he accepts the fifty dollars what is expected of him. In the other three segments Ted is held at gun point by a madman accusing him of sleeping with his wife, he baby-sits with a gangster's children, and he is asked to cut off a man's finger. The real question is, will Ted survive the night?

The only animal action in the four segments is in "Strange Brew". When Jezebal arrives at the hotel, she is carrying her cat. As she checks in at the front desk she holds her cat, murmuring to him. As she arrives at the hotel door she raises him towards the heavens. After putting the cat down, he rubs on her legs, and she picks him up, pressing him to her breasts as she gives Ted his tip. To accomplish these scenes the trainer merely handed the cat to the actress and she carried him through the shots. When the cat appears to be rubbing on the actress' legs, the trainer used a clicker to cue the cat to walk in and out of her legs. Food was given as a reward.