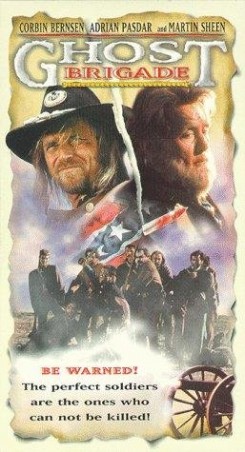 The Killing Box is the bizarre story, set in the days of the Civil War, about how a group of massacred soldiers are possessed by evil spirits and return from the dead to seek their revenge.

Killing box, still referred to by many military groups, is a term that describes a maneuver where the enemy unit is surrounded on all four sides and then massacred. That is exactly what happened to Neomyia Strand's troop, the Alabama 51st, at a battle that took place at Catum's Creek. All were slaughtered except for Neomyia, who was only wounded, but presumed dead. When the opposing soldiers discovered he was still alive, they transported him to prison.

One day before Captain John Harley from the North is to receive his discharge papers, he is summoned to Colonel Thelman's office and informed that he will not be discharged until he performs one last duty. There have been numerous crucifixion style killings of soldiers taking place all around the countryside, and a witness has stated that it was the men of the Alabama 51st performing these ghastly murders. Since all of these men were supposedly killed in the battle at Catum's Creek, this seems highly unlikely. John states that Neomyia and he were once friends, and if he is to get to the bottom of this, he will need Neomyia's help. The Colonel grants Harley permission to take Neomyia out of prison so he may assist Harley in his search for the killers, which are supposedly Neomyia's dead troop.

The following day the search party sets out on their search with Neomyia and a mute flemale slave, who has been captured as a run-away. We later learn that this young mute girl, Rebecca, holds the key to finding out exactly what unearthly thing is happening, and if, with her help, Harley and Neomyia will be able to save themselves as well as the lives of all soldiers.

There are numerous scenes where horses are present either being ridden, standing in camp, or in the background of other scenes. There is one scene where a horse is present while cannons and guns are being fired. This scene was shot in cuts. The horse was never near any type of gunfire.

In another scene there appears to be a dead badger lying on the ground, blood covering it's neck. This was a fake animal with stage blood applied to the fur. In other animal action, a soldier holds and pets a kitten.