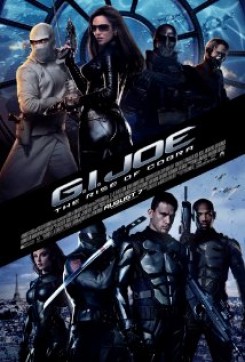 GI Joe: The Rise of Cobra

The elite military team known as GI Joe uses the most advanced military and spy equipment to investigate an arms dealer and the mysterious Cobra organization.

As men drive down a road, some cows are seen grazing in a field alongside the road. Before filming began, the grounds were checked ahead of time for safety and trainers hobbled the cows' legs. The trainers then stood off-camera while the cows grazed naturally.

A man puts his hand inside a Plexiglas cage that houses a king cobra and the snake bites him. This scene was filmed in separate shots. After they inspected and prepared the cage for the snake, trainers placed the snake inside. A special piece of Plexiglas was placed inside the cage to separate the actor's arm from the snake. When the snake appears to bite the actor, it was really biting a fake arm that the trainer held after removing the Plexiglas.

The fish that swim with the submarine and the polar bear were computer-generated images.

American Humane monitored scenes of cows grazing while explosions go off and chickens scattered around a kitchen. Both of these scenes were cut from theatrical release but may appear on the DVD.

American Humane did not monitor the scenes of men leading camels through the desert, horses pulling a wagon through town, and a boy picking up the rat and tossing it to the ground.