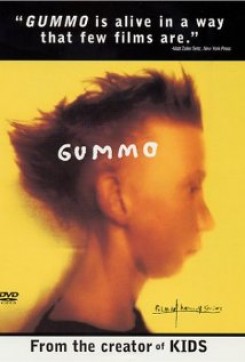 Gummo is a story about two urban youths, Solomon, 14, and Tummler, 19, who spend one hot summer hunting stray cats, killing them and then selling them to a local black market.

In the beginning of the film, a dog is seen hanging from a roof antenna in the aftermath of a tornado. The dog is later seen falling from the roof. This scene was shot in cuts using a fake stuffed dog. There is a scene where a boy is seen carrying a dirty white cat by the scruff of the neck, towards a barrel. The cat is seen squirming as the boy approaches the barrel. He proceeds to submerge the cat in the barrel full of water, supposedly holding the cat down. The scene was shot in cuts. A real and a fake cat were used for this scene. A real cat was placed with the actor for the A to B shot walking to the barrel. The cat was very docile and the squirming seen demonstrated by the animal was actually the actor moving his wrist, to make it appear that the cat was agitated. The cat was only carried 35ft. and the shot took approximately 8 seconds. The barrel is void of any water when the boy is seen placing the cat inside. After the establishing shot of the real cat, the fake stuffed cat was brought in and the barrel was filled with water. There is a scene where a dead black cat is seen hanging from a tree and Solomon and Tummler are hitting it with sticks. For this scene, a dead cat and a fake cat were used. The real cat was used to establish the close up shots and then replaced with the fake cat. There is a scene where a black cat is seen lying dead in a field and the boys are seen shooting it repeatedly with a BB gun. In another scene, a boy is seen holding a dead black cat by the scruff of the neck, as he runs across a field. A fake cat was used for both of these scenes. A fake cat was used to accomplish all of the following scenes: where a white cat is seen lying on the ground with flies flying around the body, where the boys are seen holding a dead cat while at a phone booth, and where Solomon and Tummler are seen placing what looks to be a dead stiff cat into a garbage bag. Other animal action consists of a dog seen playing with who are supposed to be two skinheads. The dog was actually the pet of the actors. There are a few scenes where the live black cat is seen being carried from A to B by some girls, being given a bath, or lying on its back having its stomach rubbed. Solomon and Tummler are also seen playing with the cat. The cat was placed on his mark and cued with verbal and hand commands.