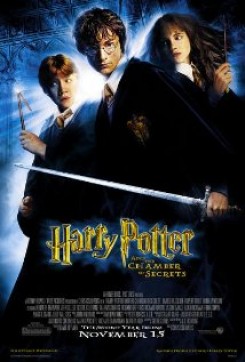 Harry Potter: The Chamber of Secrets

In Harry Potter and the Chamber of Secrets, Harry, Hermione, and Ron (Daniel Radcliffe, Emma Watson, and Rupert Grint) return to Hogwarts for their second year of witchcraft and wizardry training just in time to witness a series of "petrifying" attacks that even the janitor's cat, Mrs. Norris, cannot escape. In between hunting for the perpetrator of these attacks and fending off forces of unnamed evil, Harry finds time to remain a Quidditch star and defend himself from the magical assaults of Slytherin rival Draco Malfoy (Tom Felton) and his company of thugs.

Among the various animals featured in the film is Harry Potter's loyal owl Hedwig, as well an extended role for the Weasley's bumbling owl Errol and the return of Ron's elderly pet rat, Scabbers.

Several different kinds of owls helped to bring the magical postal carriers and companions to life, including Snowy owls, Eagles, Great Greys, and Barn owls. The coveted role of Hedwig went to Sprout, Casper, Gizmo, and Elmo, all Snowies. For all flying sequences, flying security leads were attached to the owls' jesses with each owl flying from one trainer-attended perch to another. Each owl was accompanied by at least one trainer at all times while fan and air conditioner kept the owls cool while working on set. For mild, background action, such as when Hedwig sits in her cage at the Dursley's, a trainer would place the owl in her cage for certain takes, substituting the animal with a fake, stuffed one when close-ups were not required.

Upon learning that Harry's mean-spirited guardians, the Dursleys, refuse to let Harry return to Hogwarts, Ron takes matters into his own hands by kidnapping Harry with his dad's flying car. Lucky Hedwig gets to go along for the wild ride. Harry takes Hedwig into the flying car and positions her cage in the backseat. Her eyes open wide with surprise when she sees the Hogwart's Express train fast approaching. The car dips and turns, narrowly missing the oncoming train. Once they reach Hogwart's, the car ejects Hedwig from the backseat and Harry catches her. Ron's pet rat Scabbers is also ejected, and Ron safely catches him as well. Trainers carefully placed the caged owl securely in the backseat of the stationary vehicle for establishing shots. A stuffed owl was also used for filming this scene while computer-generated effects enhanced the owl's reactions and movements inside the vehicle, as well as simulating the flight of the vehicle itself. Real animals were not used when Hedwig and Scabbers are ejected from the car.

Back at the Weasley's house, Errol, the Weasley's disoriented and accident-prone owl, mistakenly flies into the kitchen window while delivering the post. Mr. Weasley takes a letter from Errol as he peels himself off of the window and rests on the window perch. A computer-generated and stuffy owl provided Errol's window smack, while a real owl was used for the landing. A trainer expertly placed an owl on its back on the window perch and gently petted it to motivate it to lie for a few seconds. Cameras captured the relaxed bird hopping up from its lie-down position and squatting on the perch.

At Hogwart's, Errol clumsily delivers Ron's mail at the dinner table, stopping just in time to crash into it and effectively embarrass Ron in front of his classmates. Unfazed, the owl shakes his head and flies off. Trainers flew the owl from point A to point B, while a stuffy and CG owls were used for the bird's flip and crash. The real owl was trained to lay on its back for the landing, just as he had done on the Weasley's windowsill.

Two unsuspecting pigs stand in a pen on the road outside of the Weasley's abode. They stare at the approaching flying car that lands in front of their pen. Trainers erected a pen for the pigs to wander around in during the scene. The non-flying car was parked in front of the pigs' pen and the flying special effects were added in post production.

Hogwart's creepy janitor Filch holds his precious cat, Mrs. Norris, while waiting for the students to arrive at the top of the staircase. Later, Mrs. Norris falls prey to the "petrifying" attacker and hangs frozen by her tail from a hook on the wall. Maine Coon cats, Atlanis and Max, shared the coveted role of Mrs. Norris. Trainers applied a few well-placed fake furballs to the cats' usually beautiful coats to bring the mangy Mrs. Norris to life. After being placed into the actor's arms for the first scene, the warm and content cats even managed to catch a few winks while being cuddled on set by the actor. A fake Mrs. Norris was used when she is attacked by the mysterious petrifier.

Ron spits out slugs after a spell on Draco Malfoy goes awry. The slugs were computer-generated.

In Professor McGonagall's class, the students all sit at their desks with various animals. McGonagall transforms a bird into a chalice and urges the students to attempt the same with their respective animals. Ron ineptly turns Scabbers the rat into a tail-enhanced chalice instead. Many different species of animals are featured in this scene, including various lizards, snakes, birds, and other mammals. Trainers placed each animal on a desk in front of a student and stood off-camera nearby to supervise during the scene. The chalice transformations were courtesy of the special effects wizards.

In another class, Draco casts a spell on Harry and a snake appears to do battle. It hisses and crawls around until Professor Lockheart (Kenneth Branaugh) accidentally propels the reptile into the air. To everyone's astonishment, Harry proceeds to talk to the snake, revealing his ability to speak parseltongue. Professor Snape comes to the rescue and makes the snake disappear. The snake was computer-generated.

Hagrid's beloved dog, Fang, perks up his ears at Harry and Ron's approach. He barks at the knock on the door. Fang soon leads Harry and Ron into the Forbidden Forest to follow the spiders' trail. Neopolitan Mastiffs, Veto, Hugo, Bella, and newcomer Luigi, all contributed to the sizable role of Hagrid's beloved pup Fang. Trainers cued the dogs from off-camera to speak and look. For the trek into the forest, a trainer cued the dog to walk with the actors. The spiders were computer-generated.

Fang sits in the back of Ron's car as giant spiders attack Harry and Ron. The car flies off and lands safely nearby. After the harrowing ride, Fang eagerly hops out of the car and trots back home to Hagrid's hut. The stationary car was specially outfitted with an extra-wide backseat to accommodate the dog's enormous size. A trainer verbally cued the dog to hop into the vehicle and used hand signals to prompt him to turn around in the seat and sit. Trainers also cued the dog from off-camera to exit the vehicle.

Hagrid holds a dead chicken in one scene. Although Hagrid's chicken was actually made of rubber, several live chickens were brought in and filmed for a scene that was eventually omitted from the final cut of the film. The tame chickens were placed in a holding pen and ate feed off of the ground.

In one picturesque sequence, several horses pull carts and students in small sleighs in the winter-white Hogwart's courtyard. Trainers attached their horses to lightweight sleighs and drove them a short distance in the artificial snow. Movie magic helped fill the courtyard with horses and sleighs, when in fact there were only a few on hand.

Though they're easy to miss, several rats scurry around inside of the dark tunnel inside the Chamber of Secrets. Trainers released the brown rats to nibble on peanut butter that had been smeared in various spots on the tunnel set and retrieved them between takes.

Many elements of the film involving fantasy animals were computer-generated movie magic. These include the snake door, the red phoenix bird, and the spiders.