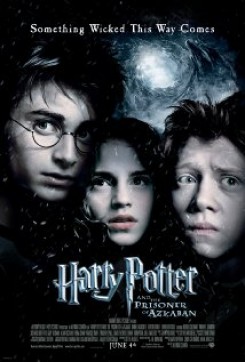 Harry Potter And The Prisoner of Azkaban

During another dismal summer with the Dursleys, thirteen-year-old Harry Potter struggles to control his temper when Uncle Vernon's obnoxious sister Marge comes to visit. His raging feelings eventually overpower Harry, however, and he accidentally causes her to inflate like a monstrous balloon and drift away. Fearing the wrath of his aunt and uncle – and repercussions from the Ministry of Magic, which strictly forbids students from using magic in the Muggle world – Harry escapes into the night.

Oddly, Harry receives no punishment for his errant wizardry, and during his third year at Hogwarts must face his greatest challenge yet. It seems that Sirius Black, an escaped convict from Azkaban prison, is on the loose and headed straight for Hogwarts—and Harry. This news is all the more chilling when Harry learns that Sirius may be the person responsible for killing his parents. Harry will need all of the courage, magic and support he can muster to uncover the truth behind Sirius Black and his ties to the gifted young wizard's mysterious past.

As in the previous Harry Potter films, a snowy owl named Gizmo played the part of Hedwig. In one scene, Hedwig perches on a tree stump in the forest while Harry pets him and talks with professor Lupin (David Thewlis). The owl flies off and suddenly the weather turns snowy and cold. In American Humane's initial screening of the film, this sequence continues, and Hedwig lands on the roof of a house. A horse and sleigh wait outside the home, and inside, a dog lies on the sofa. Some pigeons also take flight.

To achieve this sequence, Hedwig stood on an Astroturf-covered perch positioned 15 feet above the ground and approximately 20 feet away from a wind machine that helped create the swirling wintry scene. A trainer turned on the machine and held out a pole equipped with a food bowl at one end. The trainer then whistled and called to the owl, which flew to capture the food reward. After each take, the trainer turned off the wind machine and would retrieve and reward the bird. For safety, a protective wire mesh covered the machine's fan, and a specially designed box covered the front so that the owl could not accidentally fly into the machine.

The props department feigned the snow on the ground with Epsom salts, and the falling flakes were made of tissue paper bits blown around by a wind machine. A trainer attached the horse to the sleigh and stood nearby, dressed as an extra. Another trainer put the dog on its mark on the sofa and stood just off camera using hand signals to get the dog to stay. The pigeons, meanwhile, were trained to fly to red plastic trays held up by their handlers. Two trainers stood on opposing cherry pickers to give the birds added height for their flight. One trainer held a release box with the pigeons inside while the other had a cage and a red tray. When the tray was held up, the handler released the birds one at a time and they flew to the red tray and inside the second trainer's cage. This action was filmed on a closed set and all unnecessary crew was removed.

When Harry fights with the monster book, Hedwig stands on a shaking perch. The shaking was a special effect and the perch never actually moved. In a scene at the Leaky Cauldron, Hedwig sits on a perch and then flies to Harry's outstretched arm. A trainer stood just behind the actor and whistled while the boy extended his arm for the bird to land.

A large waddling bulldog named Ripper enters the Dursley's house and runs into living room. Aunt Marge takes the leash off Ripper and he jumps up on couch. Later in the scene, the bulldog licks a plate on floor and howls when Harry picks up the empty plate. Ripper then laps some brandy from a glass at the table. The dog barks and growls when he sees Marge grow fatter and fatter until she begins to float up in the air. Ripper grabs hold of Uncle Vernon's pant leg as he tries to help his sister, and they both float up and then fall to the ground as Marge drifts away.

Four bulldogs were on call for this part. In order to entice the dog to lick the plate and glass, trainers put gravy on the plate and smeared sardine oil on a plastic brandy glass filled with colored water. The dog's howls and growls came readily upon the trainer's verbal cues. Richard Griffiths, the actor playing Uncle Vernon, was fitted with leather half chaps to protect his legs from the dog's teeth, and a rope that the dog loved to play with was tucked inside the chaps. Trainers showed the rope to the dog and encouraged him to pull on it. As the actor walked around the set, the dog walked with him tugging at the rope.

A stuntman doubled for the actor when Uncle Vernon and the dog fly up in the air and then fall down, but the daring canine performed this stunt himself. Both stuntman and dog wore a cabled harness controlled by an off-camera crew member. The dog's hind legs were approximately ten inches off the ground and he was suspended for less than eight seconds. All crew members and actors on set did not move until the dog was released from the harness and leashed by his handler. Five trainers remained on set at all times for this sequence.

Hermione's cat Crookshanks chases Scabbers, Ron's pet rat, down the corridor in the Leaky Cauldron. The part of Crookshanks was played by two red Persians named Pumpkin and Crackerjack, and four brown rats were alternated for the part of Scabbers. Two trainers stood on one end of the corridor while another two stood at the opposite end. One trainer released the rat and it ran down the corridor to a waiting handler who had a second release box with food inside. After giving the rat a significant head start, yet another trainer released the cat and it ran straight to a trainer holding out a tempting treat.

Mrs. Weasley (Julie Walters) hands Scabbers to Ron through the train window. He carries the rat through the train and into the compartment where his friend Hermione sits with Crookshanks. The train compartment was set up inside the studio on steel girders so it could move, and the cat had been sufficiently prepped so that the movement didn't bother it at all. For much of this scene, an animatronic rat played Scabbers; however, a trainer sat across from the actors when both live animals were used to make sure that they remained separated at all times.

Ron carries Scabbers as the kids run from Hagrid's pumpkin patch in one scene. The rat suddenly bites Ron and he drops and chases after his pet when it scurries off. The ferocious-looking black dog appears from out of no where and grabs Ron, dragging him toward the trunk of the Whomping Willow. A real rat was used when Ron runs with Scabbers in the beginning of the scene, and the trainer talked with the young actor in depth about how to hold and handle the rat. An animatronic rat was used for the rest of the sequence, except for the moment when the rat runs away and the kids follow it. In that instance, footage of a live rat running A to B was inserted into the film during post production.

Ron has Scabbers with him as he huddles, terrified, in the shrieking shack. Sirius Black (Oldman) grabs the rat and tries to stab it but the rat runs away and hits the wall, taking on a human form. For this scene, the trainer handed the rat to actor Rupert Grint, who held it in his arms; Sirius later grabbed an animatronic rat from Ron. To safely achieve this effect, the director stopped filming midstream so that a trainer could take the live rat away and give the actor an animatronic version. A real rat ran across the floor from one trainer to another, but it was the animatronic rodent that actually hit the wall. This action was filmed in separate shots and inserted into the movie during post production.

Doris, a chestnut mare, and a dark bay pony named Stars and Stripes portrayed the ghost horses that crash through a window into the Great Hall and canter down the foyer. Production set up a hurdle and the experienced horses and riders jumped over it with ease. The distance from the jump to the hall door was approximately 25 feet, and the horses rode another 100 feet into the Great Hall. Thick rubber matting – cleverly painted to look like tile – covered the floors to cushion their gait. This sequence was filmed in front of a green screen and the window glass that shatters was computer generated.

All of the animals in the live portraits are real except for one prop hippopotamus, although the bird that sits on top of the hippo is real. Trainers brought each of the animals to set individually so they could be filmed in front of a green screen. The animals were on set for fifteen minutes or so prior to the action to get them comfortable with their surroundings and production cleared the area of all unnecessary crew. Trainers placed the animals on mark and used verbal cues and hand signals to elicit the desired behaviors.

Birds fly all around the pumpkin patch, yard and Hagrid's hut while the young wizards hide. Later, when Harry walks away from the patch, a bird sits in his path. As the bird approaches him, Harry shakes his foot to shoo the bird away. He then comes upon a large wooden post with a chain around it and a large black bird perched on top. Harry starts to remove the chain when the bird nips at his finger.

A combination of pie crows and ravens were used for this scene, and seven handlers worked on the set at all times. The fiberglass pumpkins were covered in wax and had their tops scored to provide traction for the birds. Eyelets bored into the sides of the pumpkins enabled trainers to secure the birds using jesses, which are short straps of leather or silk secured around the leg of a bird to which a leash or line is attached. For this scene, eight real birds were positioned at various spots – on a wheelbarrow, a lamp, on pumpkins, on the roof of the house, etcetera – and secured with a jess and fishing line. Several plastic birds were also intermingled with the live ones to make it look like an abundant avian gathering.

A trainer placed one bird on the ground and the actor began to walk toward it. In a separate shot, the actor gently moved his foot near the bird to give the effect of shooing it away. Another trainer put a bird on top of the post and used a jess with fishing line to keep it in the shot. The bird that nips Harry's hand was animatronic. In order to choreograph the birds in flight, a trainer used a release cage with separate compartments to set three birds free. After the birds were released, the trainer called to the birds and they flew back into the release boxes.

Although this third installment of the Harry Potter franchise was filmed outside the United States and thus exempt from the American Humane Association's on-set jurisdiction, production requested that an Animal Safety Rep from the Film & Television Unit monitor the film's extensive animal action.