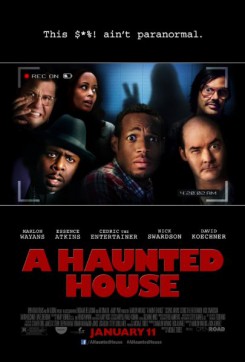 This raucous comedy satirizes all the documentary styled found footage horror movies that have been released in recent years.

During the filming of this spoof of documentary horror films, Haunted House, the American Humane Association was there for all the animal scenes to make sure they weren’t spooked.

In a slightly more intense scene where the same dog runs out of the house and gets hit by a car and dies in the driveway, the scene was shot in multiple takes to make it look as if the dog were hit by the car, while in reality the dog never came close to a moving vehicle. The trainer merely cued the dog to run outside the house, then rewarded him with a treat. They then filmed a car screeching into the driveway in a separate take.The dead dog in the driveway was a fake.

In the scene where two chickens are fighting in the kitchen with actors holding them, the trainers used one hen and one rooster. Prior to shooting, the actors were taught how to hold the chickens. The trainers and the American Humane Safety Representative were on hand to make sure there was no contact or aggressive behavior between the birds. The director filmed close-ups of birds flapping their wings, giving the impression that they were fighting, although they never came close to touching each other. The chickens were returned to their crates after filming.

In the scene where the actor walks into the bathroom, sees a rat and runs out, trainers placed a rat on the ground with some peanut butter to keep him on its mark. They called action, the actor walked into bathroom saw the rat and ran out.