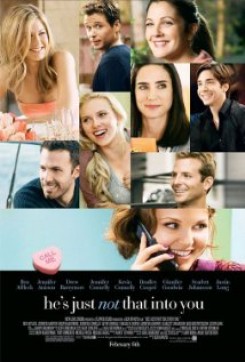 He's Just Not That Into You

Lives intertwine as several people deal with relationships, marriage, cheating, friendship, dating, commitment issues and trying to understand the language of love and the major differences between men and women.

A dog sits on a dog bed watching women get ready for a wedding. A chocolate lab named Rocky played the role of Buddy in this film. For this brief and mild action, a trainer placed the dog on his mark and cued him to lie down and stay.

Later, Beth (Jennifer Aniston) walks Buddy, who is wearing a ribbon and bow around his collar, down the aisle during her sister's wedding. The cast and crew members were introduced to the dog and instructed on his proper handling before filming began. The trainer handed the leash to the actress moments before filming and stood just off-camera to cue the dog to walk the short distance down the aisle to an awaiting trainer. The ribbon and bow were secured to the dog's collar, not to his neck.

Due to late notification or limited resources, American Humane did not monitor some of the dog action or any of the goat action.