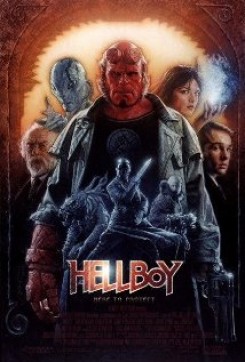 Born in the flames of hell and brought to Earth to perpetrate evil, Hellboy was rescued from sinister forces by the benevolent Professor Broom (Hurt), who raised him to be a hero. In Dr. Broom's secret Bureau of Paranormal Research and Defense, Hellboy (Perlman) creates an unlikely family consisting of the telepathic "Mer-Man" Abe Sapien and "Pyrokenetic" Liz Sherman (Blair), the woman he loves who can control fire. Hidden from the very society that they protect, they stand as the key line of defense against an evil madman who seeks to reclaim Hellboy to the dark side and use his powers to destroy mankind.

American Humane did not monitor this production, which was filmed in the Czech Republic, and has been unable to acquire information about the animal action from the movie's trainer because he does not speak English. For that reason, we are rating the film "Unknown". The following is a description of the animal sequences viewers can expect to see in the film.

In the laboratory of Professor Broom's Bureau of Paranormal Research and Defense, Hellboy hangs out with a bevy of feline friends that meander all over the furniture, floor, etc. meowing and jumping around. In a later scene, Meyers holds a humongous tray of towering pancakes while the marauding cats meow and play around him.

When Liz comes "home" to Broom's, she greets Hellboy and picks up one of his cats, snuggling with it before setting it on the ground again.

When Hellboy fights the monster in the subway, one young woman implores him to save her box of kittens, so he scoops it up and holds the box of crying cats while he battles his nemesis. During the fight sequence, the cats appear to be computer generated images (CGI). When the fight is over, he gently returns the box to its owner, and lets one kitty sniff his finger.

Two mounted police officers patrol the streets at night. In a later scene, the mounted police cross A to B in front of a building that looks like a museum.

When Hellboy and 'Mer-Man" ride around in the back of their modified garbage truck, roosters appear to be housed in cages up near the back of the cabin area.

A jealous Hellboy tails Meyers and Liz, jumping from rooftop to rooftop. He miscalculates and hangs by his fingers from a ledge when suddenly a pigeon flies next to his hands. Once on the roof, he meets a boy and in the background there's a coop full of numerous cooing pigeons. In a later scene, Hellboy sits on the roof with the boy, spying on Meyers and Liz, when 2 pigeons fly up in front of them with a flutter of wings.

When in the sewer tracking down the monster, Hellboy lifts up a sewer grate and what appears to be CGI rats scurry around on it.