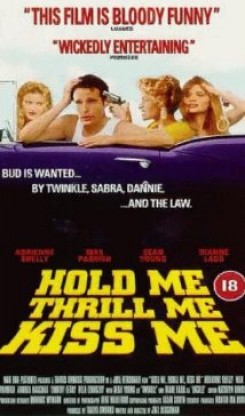 Hold Me, Thrill Me, Kiss Me

Hold Me, Thrill Me, Kiss Me is an off-the-wall comedy telling the story of Eli, now named Bud, after his unsuccessful attempt at being a thief. After losing his job, Eli is desperate for money, so he decides to rob houses in a wealthy area of town. On his very first job he is caught in the act by Twinkle, the daughter of the proposed victims. Instead of turning him in, she aids him in his robbery in return for sexual favors. Over a period of time, Twinkle ends up giving Eli a small fortune. This affair continues until Eli can no longer deal with Twinkle's obsession with him. When he tries to break it off with Twinkle, an argument ensues and Eli shoots Twinkle and leaves her for dead. Eli flees the city with his recently acquired loot and takes on the new identity of Bud. He meets Sabra in a strip joint and moves into the trailer park where she lives. Sabra is smitten with Bud, but Bud has eyes for Dannie, Sabra's 16-year-old sister. Sabra, a crude and vulgar girl, becomes extremely jealous of Bud and Dannie's relationship and will go to any lengths to break them up. She even goes so far as to have Dannie's dog, Gus, put to sleep as punishment. When Dannie finds out what her sister has done, she poisons her Yoo-Hoo breakfast drink. Afterwards she has a twinge of guilt and starts to pour the mixture out. Sabra enters as Dannie is doing this and grabs the container from her and drinks it. Sabra dies within minutes. Dannie recruits Bud to help her with the disposal of her sister's body, and now the two of them make plans to run off to Rio with Bud's cash. Little do they know that one of the neighbors in the trailer park located and dug up Bud's hidden money. Now the chase is on to recover the loot.

Dannie loves all animals. Her Great Dane, Gus, is seen throughout as her companion. After Sabra has supposedly had Gus destroyed, which is never shown on screen, she brings the large canvas bag, apparently containing the remains of Gus, back to the trailer park for Dannie to see. No dog is ever shown and, of course, there was no dog in the bag. In reality, the bag contained bundles of cloth. Kittens, rabbits and birds, are also seen milling about Dannie's trailer or in their cages as atmosphere.