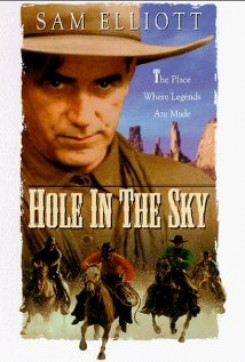 Hole In The Sky

Hole In The Sky is a story set in the year 1919 in Montana's Selway Forest. As told by Mac, a seventeen year old, about his summer adventure working with the Forest crew, dynamiting a trail through the mountains. Bill Bell is the Forest Ranger, in charge of the operation. All the men respect Bill for his abilities at being the best at everything, from packing a mull to tying ropes. Bill also happens to be Mac's idol and he becomes jealous when Bill starts favoring their new cook, Hawk. Mac gets mad at Hawk, when one night Hawk refuses to play cards with him. It makes matters worse when again Bill takes up for him and tells Mac to drop the subject. The next day Bill decides to give Mac a new assignment. He sends Mac up to the top of the mountain to stay at the ranger camp there for a couple of weeks, or until the first snow. When Mac asks what happened to the last guy up there Bill tells him the guy claims he saw a rattlesnake in his camp. Everyone knows that rattlesnakes are not suppose to venture that high up the mountain, so Mac leaves feeling very smug because he knows that Bill doesn't think he can make it that long up there alone. The weather gets pretty rough with the wind and rain but Mac is determined to show Bill that he can handle anything he throws at him. During a big storm Mac's tent is blown away and the next day while trying to organize camp he encounters a rattle snake, which helps him to decide that he has had enough. When he returns to camp Bill decides to keep him there to help him get ready to pack up, because summer is almost over and they will return to Hampton. Once again Mac tries to get Hawk to play poker with him and he refuses, telling Mac that he never plays with the people he works with. Mac doesn't give up therefore Bill tells Hawk to show Mac why he doesn't play with people he works with. After Hawk's display at card playing they all understand. Hawk is a professional card player and Bill is going to bet all of his money on Hawk at a card game at the end of summer. With Mac's help Bill convinces all the men to get in on the action and put up some of their money. At summers end they all meet in Hampton at the stables to form their plan and then head for the saloon. This one night of card playing will change all of their lives in some way. The next day Mac helps Bill pack his mull to leave and as Bill is leaving his dog comes running through the stables to join him. Bill tips his hat waving as he rides down the road leading a pack mull and his dog running alongside.

When Mac is at the hilltop camp he encounters a snake under some brush. The snake raises its head rattling at Mac and he grabs a shovel hitting the snake. The scene was filmed in cuts. The snake is shown as the actor pulls something away from the brush then he picks up a shovel raising it to strike at the snake. Then the camera shows the snake and cuts back to the actor lowering the shovel, hitting the ground. The actor never comes in contact with the snake nor are they seen in the same shot when he is supposedly striking the snake with the shovel. The trainer merely placed the snake on the ground. The scene was shot and the trainer retrieved the snake at completion of the scene. Bill is seen in several different scenes riding his horse and leading a pack mule. He goes into town to pick up payroll riding his horse and goes into the stable. Bill removes the saddle himself and strokes the horse so she doesn't get spooked. Another time Bill is rubbing the horse down after removing his saddle for the day. Then there is a scene where Hawk the cook brings lunch to the workers on top of the mountain. All of these scenes where shot in cuts with the horse walking from A. to B., with either the actor or a stunt double riding them. The actor who played Bill was prepped before hand by a professional outrigger and mule packer. Therefore, when he did any scenes with the mule he was familiar with the props involved and removing or putting on a saddle. When the summer is over and Bill is leaving town he rides off leading a pack mule along with his dog running beside of him. The trainer merely placed the dog on his mark then using voice and hand signals called him to his next mark.