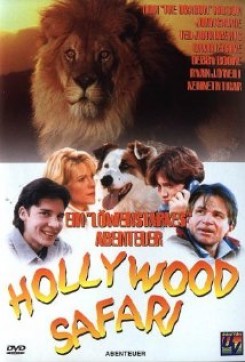 Hollywood Safari is about an incident where a mountain lion attacked some locals at an area park and how the deputy sheriff captures the wrong lion. The lion he has captured is the pet of a local animal trainer, that escaped his trailer when the lock fell of the door. The deputy sheriff is determined to make the evening news, so he decides to kill the lion before the sherrif get back into town. Peter and Josh, the trainer's sons, equipped with a tranquilizer gun, put their lives on the line and go into the woods looking for the real mountain.

In the beginning of the film a mountain lion is seen chasing Tony, a boy in a state park picnic area. The animal catches up with Tony, jumping onto a picnic table and from there onto the teenager, knocking him to the ground. The two are seen thrashing around on the ground. This scene was shot in cuts. Trainer #1 releases the lion at point A while trainer #2 calls him to point B, cueing him with food. The picnic table was raised on four boxes. Trainer #2 was on the table while trainer #1 was waiting on the other side to retrieve the animal. For the shot of the lion and Tony thrashing on the ground, trainer #1 released the lion to trainer #2 who was acting as a double for the actor. The lion was actually playing a game with his trainer that they play frequently at home. The set was cleared of all unnecessary crew members to insure the safety of the animal and crew. There is a scene at the Johnson animal compound where a tiger supposedly attacks one of the trainers. For this scene, the actual trainer acting as a double for the actor, played attack, a familiar game, with the lion. As the compound prepares to go to a filming location, various animals are seen being loaded into trailers. Among the animals are camels, a mountain lion, etc. While traveling down the road, Kensho, the mountain lion, is seen pacing back and forth in her trailer. The lock comes off of Kensho's trailer and when the group has to stop for a traffic accident, she pushes the door open with her head. She jumps down from the truck and across the road, escaping into the woods. Later she is seen walking from A to B through a picnic area and then sitting on a picnic table eating some food. This scene was shot in cuts. The trainer placed the mountain lion on her mark and cued her with verabl and hand commands with food as a reward. Someone places a call to the sherrif's department to inform them that a mountain lion was just seen in a park. They immediately dispatch men to the site and shoot Kensho with a tragquilizer gun. The actual shooting is not seen. Josh, Peter, and their dog, go inot the woods looking for the real mountain lion. The mountain lion is seen chasing the boys and dog through the woods. The boys fall into a pit and the mountain lion is seen looking down at them snarling. Their dog catches the lions attention and the animal starts chasing the dog. The dog comes back and the boys tell him to go get help. He is seen running through the woods, down the road and into the sherrif's station. Troy notices that the dog is back and after watching his actions, his realizes that the animal is trying to tell him something. Troy along with one of the deputys drive out to the woods where they find the boys.