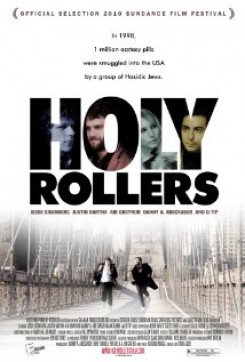 A rebellious Hasidic Jew recruits innocent Hasidim to smuggle ecstasy pills from Amsterdam to America, since he figures customs agents would not suspect such puritan citizens to do anything illegal.

At the airport, a customs officer holds a leashed dog as a young Hasidic courier drops his suitcase, which the dog briefly sniffs. Another dog is seen in the background. For this very mild action, well-trained German shepherds were handed to the actors moments before filming, while their trainer stood just off-camera cuing the dogs. The actors had been instructed on the dogs' proper handling. All grounds were inspected for hazards and the set was closed and secured.