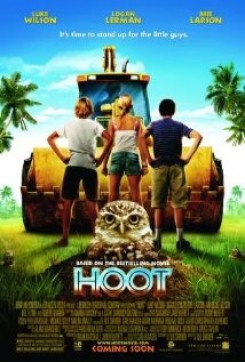 Based on Carl Hiaasen's 2002 young adult novel of the same name, Hoot tells the story of new kid Roy Eberhardt (Logan Lerman) and his struggles to fit in when his family is uprooted yet again. Shortly after moving from Montana to Florida, Roy is befriended by a group of kids who have uncovered a plot to build over a local habitat of endangered burrowing owls. By banding together, the kids bring their message to the community of preserving wildlife and these small but special owls.

The film's opening sequence contains footage of a soaring eagle and a herd of running deer. These animals were filmed documentary-style in Montana with no interference from the production. From a distance, Roy (Logan Lerman) is seen riding a horse along a mountain ridge and stopping for a drink at the river's edge. Trainers and the on-set Safety Rep checked all footpaths and had them cleared of rocks as needed. A stunt double rode the horse, and the helicopter pilot, the first assistant director (1st A.D.), the trainer and the Safety Rep all had radio contact to communicate as needed. The pilot kept the helicopter above the 150-foot height requirement during filming, as required by American Humane's Guidelines for the Safe Use of Animals in Filmed Media.

As Officer Delinko (Luke Wilson) investigates a noise in the construction site's portable toilet, an alligator snout surges out of the water. This scene was filmed in cuts, some of which employed a puppet gator head. The live action involved a six-foot alligator named "Liz." The trainer held Liz's head to get her mouth open and then gently moved her head through the toilet opening and back down again. The part of the gag filmed in the blue water involved the puppet gator.

The animal coordinators obtained three burrowing owls from the Miami Museum of Science's Falcon Batchelor Bird of Prey Center, which works with a local foundation to rehabilitate sick and wounded birds of all species. According to the official Hoot website, because the birds were undergoing rehabilitation that precluded their return to the wild, the U.S. Department of the Interior, U.S. Fish and Wildlife Service, for the first time allowed the use of an indigenous, migratory bird in a film production.

All scenes with the owls were video effects shots (VFX) filmed separately with an 8-by-10-foot tabletop "burrow." The owls learned to look in different directions for the camera, and to elicit this, the trainer moved a bait stick around before their eyes. This training method was also used to get them to peek out of the burrows and go back inside. The three owls were replicated digitally for a final scene where it looks like dozens of owls emerge from their burrows. The baby owls were also computer-generated imagery (CGI).

In one scene, Roy shakes out a burlap sack, causing five venomous cottonmouth snakes to fall out and writhe around his feet. For this action, trainers used non-venomous banded water snakes, which are frequently mistaken for cottonmouths. As a safety precaution, production set up a 10-foot Plexiglas barrier between the actor and the snakes, and several crew members surrounded the barrier just in case any snakes got through. The snakes were dropped by a handler—not the child actor—from a height of approximately two feet onto a layer of soft leaf litter covering the ground. A stunt double stood in for Roy for the close-up shot of the snakes dropping right next to his shoes.

Curly Branitt (Tim Blake Nelson), the foreman at the construction site, gets two rottweiler security dogs. Kalo (Robert Donner) delivers the dogs in a cage in the back of his pickup truck. When the old man releases the dogs, they charge at Curly and he scrambles inside his car just before the rottweilers jump up against the door, barking ferociously.

Trainers elicited this performance through the use of verbal cues, hand signals and many treats. High temperatures and humidity during filming prompted the Safety Rep to request that the dogs have breaks in an air-conditioned truck, plenty of drinking water in the shade between takes, and ice water to moisten the pads of their feet. For a later shot when the dogs are supposedly terrified by snakes at the lot, one trainer set a banded water snake on the ground and it was filmed slithering for a few feet while the dogs were off to the side, restrained on leads.

As Roy and Mullet Fingers (Cody Linley) glide through the water on a skiff, Mullet displays the origin of his name by nimbly grasping a mullet out of the water for a brief moment, then dropping the fish back in. For this sequence, the trainer sat off-camera at the bow of the boat and handed the actor a fish from a small bait tank beside her. Linley then brought his hand up from the side of the boat, showed his catch to the camera, and released the mullet back into the water. At the end of the film, Mullet leaves a water-filled sneaker on Roy's porch that has a mullet swimming inside. This silicon-sealed shoe was filled with treated water from a fish tank, and the mullet was used for approximately one minute before being returned to the tank.

The boys continue their trip through the Everglades to witness the beauty of nature and man's encroachment upon it. The montage includes shots of wild birds, turtles, alligators, fish and a manatee. This footage was filmed at Silver Springs, a 350-acre nature theme park near Ocala, Florida. The crew was warned not to try to corral any specimens of the local bird populations as filming was in a nature preserve. The manatee was stock footage purchased by the production.

In a police interrogation room, Officer Delinko tries to intimidate Dana Matherson (Eric Phillips) with a baby alligator that he removes from his sports bag. The baby gator is used for educational programs at the Miami Science Center, and its trainer stood nearby throughout the scene. The gator was in the large, open canvas bag for only a few moments during the actors' dialog; it was removed and held by the trainer on cut and between takes. Wilson received instructions on how to properly hold the gator, and the American Humane Safety Rep monitoring the scene was impressed with how Wilson maintained his composure, and his grip on the reptile, even when it urinated on him!