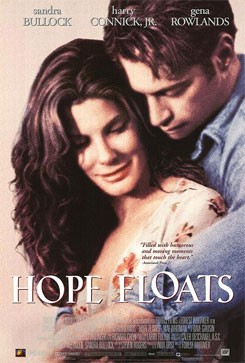 Hope Floats is a film about Birdee, a local girl who comes home after being humiliated on national television. The source of her agony is Connie, Birdee's best friend, who announces on TV that she is having an affair with Birdee's husband.

A dog is used throughout the film. He chases a truck at a distance, chases ducks in the pond, and walks A to B, or sits on various surfaces. The trainer placed the dog on its mark and cued it with verbal or hand commands. Other animal action consists of some birds flying in the air and into their cages, ducks in a lake and a dead fish on a rock (after it is supposedly caught by Birdee and a friend). There are also various taxidermic animals all over Birdee's mother's house. The production provided American Humane with all necessary receipts for the deceased animals used in the film. American Humane was not present to monitor the animal action; however, a representative from the Humane Society of Austin & Travis County contacted the production on our behalf.