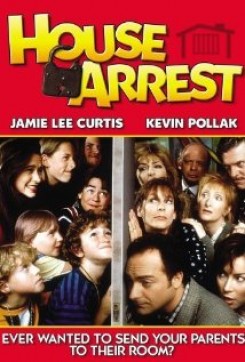 House Arrest is a film about two children, 15 year old Grover, and Stacy, his 10 year old sister, and how they put their parents under house arrest. Grover and Stacy have a special present for their parent's tenth wedding anniversary. Grover took a collection of home videos and had a friend make one tape of special moments in their parents life over the past ten years. When the big day arrives, the kids give their parents the video tape at breakfast. Grover and Stacy do not receive the happy response they anticipated, instead their parents, Janet and Ned, tell them they are separating. The two children are devastated. While at school, Grover tells his friend Mat what is happening and Mat jokingly suggests that Grover lock his parents in the closet until they reconcile. Grover thinks about it awhile and decides to do just that however, instead of the closet he will lock them in the basement. He and Stacey go home after school and decorate the basement like their parents Hawaiian honeymoon. When Janet and Ned arrive home from work, Grover and Stacey coax them into the basement and lock them in. They explain to the couple that after they reconcile they can come out. The children provide them with food and go to bed. While at school the next day, Grover tells Mat what he has done and is overheard by T.J., another classmate. That afternoon, T.J. comes over and with the help of Mat and Grover, he puts an iron storm door on the basement so Grover can keep an eye on his parents. When T.J. leaves he takes Mat with him and on their way home they decide that they want to do the same to their parents. The boys think that it will improve the rocky relationships between their own parents. T.J. and Mat kidnap their parents and arrive on Grover's doorstep to add them to the basement. Along with the kidnapped parents, the boys bring their siblings, a snake, and a dog, which Grover's cat takes an instant dislike too. The chaos has just begun as the parents try to find a way out of the basement and the children and animals demolish the house. To make matters worse, Chief Rocco, Grover's nosy neighbor, is suspicious and is either looking at the house with his binoculars or knocking on the door. He really causes trouble when he calls the police on the kids and they show up to find one of the parents stuck in a basement window, trying to escape. The parents are eventually released and the kids are arrested. It might not have gone the way Grover planned, but the end results are exactly what the kids wanted. Everyone's parents are back together again and living harmoniously.