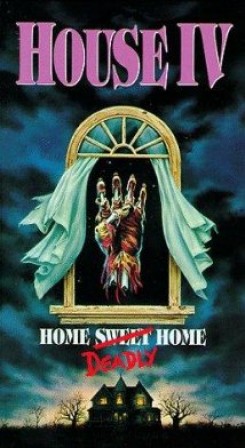 Roger has inherited a decrepit and decaying country house from his father and his step-brother, Burke, desperately tries to convince him to sell. Roger won't budge from his position because he grew up there and he promised his dad he would never give up the place. With his decision to keep the eerie homestead made, Roger, his wife Kelly, and their daughter, Laurel, leave to drive back to the city. While Kelly's driving, a tire blows out causing a bad accident with Roger and Laurel trapped in the car. Kelly manages to pull Laurel clear but as she returns to free Roger, the car is engulfed in flames. Although severely burned, Roger survives long enough to be taken to a hospital where Kelly must make the decision to suspend life-supports and Roger finally succumbs to his injuries. Grief-stricken, and blaming herself in part for Roger's death, Kelly and Laurel, now crippled from the accident, move into the old house that Roger loved so much. Kelly places Roger's ashes on the mantel and soon begins seeing and hearing strange things. She learns from the old Indian care-taker that the house had been built over a sacred Indian spring. When the supernatural happenings turn destructive Kelly considers caving in to Burke's persistent demands to sell the house.

While rummaging through some old things Laurel discovers a ceramic lamp in the shape of a dog. She names the dog Algernon and keeps the lamp at her bedside. When Laurel's endangered, the lamp comes to life in the form of a Rottweiler and chases two thugs through a 2nd floor window. As the dog follows the thugs to the ground he changes back into a lamp which shatters as it lands. The real dog wore a lamp shade that was fitted like a hat with a chin strap, which our representative checked to make sure that it was not binding. The window that the thugs jumped through was made of harmless candy-glass. The glass was already broken at the time the dog jumped through it. A padded platform was constructed for the dog to land on after jumping through the window to shorten the actual jump to only a few feet. The dog was then filmed from outside the house to get a reverse shot of his coming through the window. This scene was filmed in cuts and the platform was never visible. The lamp was substituted for the dog in one shot and the magic occurred in the editing room. A rat is seen briefly in the basement. Oil flowing from a can turns into a snake and a box of matches turns into a box of bugs also with the help of film editing.