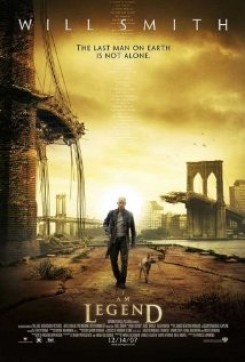 Scientists find a cure for cancer, but it causes a worldwide viral epidemic that wipes out most of the planet's population, aside from some "infected" zombie-like survivors. One immune survivor (Will Smith) believes there are others out there like him, but to find them, he must fight to survive the mutants.

Robert Neville's (Smith) dog, Samantha ("Sam"), appears throughout the film, performing various actions. For the mild actions, such as sitting, walking, lying down with Neville, hiding under a desk or looking in certain directions, trainers placed the dog on her mark and used hand signals and verbal cues to get the dog to perform the action. They rewarded the dog with treats. Indoor stages were secured and quiet, and outdoor sets were thoroughly inspected for debris and surrounded by several dozen production assistants. When the dog appears to eat human food, it was a mixture of kibble, chicken and baby food.

Sam is on the wing of an aircraft while Neville drives golf balls. This scene was filmed on an actual airplane with especially large wings. The trainer walked the dog up custom-made stairs and put her in a "down/stay" position on a platform with special traction on top of the wing. The trainer hid in a nearby box where he maintained the dog's eye contact and cued it to stay. Several trainers surrounded the area as a precaution. The trainer walked the dog down the stairs immediately after filming.

When Sam is seen in a moving vehicle, a foam mat covered the car seat for traction, and the dog was tethered to the seat with a waist tie, which was held by a trainer hiding in the backseat. The backseat trainer gave the dog commands, and a trainer just outside the car door occasionally held food out to get the dog to stick her head out. A stunt car was used for the part of the scene in which Neville drives erratically. High-speed chases were filmed in separate shots without the dog — she was never actually in a high-speed chase or jolted around in a sudden stop. For shots in which the car spins around, crew members propped the special car up onto rotating dollies and manually spun it for the short take. The dog, who seemed to enjoy the movement, was secured in the car and held by the trainer. For scenes in which the car simply drives down the street, the actor drove slowly and the dog was secured by a waist line attached to a harness and leash held by a backseat trainer.

Neville gives Sam a bath. The dog was accustomed to getting baths and the water was comfortably warm. The shampoo was a no-tears formula and a traction mat lined the bottom of the tub. The dog was given treats and was thoroughly rinsed and dried between takes.

Sam runs on a treadmill. The dog was well-rehearsed to run on the treadmill. Trainers got her accustomed to a slow walk and gradually worked their way to a run. The dog was attached to a safety rope held by a trainer, but she was so comfortable with the action that the trainer never needed to use it. The dog was rewarded with treats.

Sam and several "infected" dogs get into a fight. A shot of Sam was filmed for reference, and then the fight was computer-generated. When Neville carries his injured dog after the fight, trainers placed her in a "down/stay" position and cued her to keep her head down as the actor lifted her and placed her in the car. The dog's injuries were created using prop blood made of a nontoxic petroleum jelly/corn syrup mixture. The dog was never near the gunfire heard in the scene. When Neville brings Sam back to his lab and gently sets the dog on the operating table, nearby trainers cued the dog to "play dead" and keep her head down. The actor was well-rehearsed in handling the dog. For a shot when Sam tries to bite Neville, a chew toy was placed near the actor's shirt and the dog was cued to "get it." The toy and the trainer were in the scene but removed in post-production. The syringe he uses was a retractable prop and the dog was never injected. The dog's red eyes and veins were a digital effect.

In flashback scenes, Sam is seen as a puppy. For these scenes, trainers instructed the actors on how to perform the mild action — mostly holding the puppy in their arms or laps. The scene with the puppy in the moving vehicle was filmed on an indoor stage against a green screen, and a trainer was hiding in the backseat. The vehicle never actually moved; crew members rocked the vehicle to make it appear to move, and the moving background was added in later. The puppy was accustomed to being held and was unfazed by helicopter noises. Between takes, she was placed in a heated blanket to keep her warm and relaxed. The helicopter explosion was computer-generated imagery (CGI).