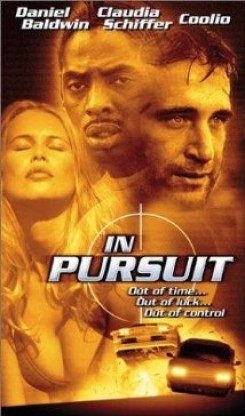 In this drama a lawyer is convicted of murder. Since the deceased is his lover's husband, he is not sure he can trust her. After his escape from prison, he has no one else to turn to for help, so he begins to trust his lover again. This proves to be a mistake.

Early in the film, our hero escapes from prison, and policemen with bloodhounds on leashes try to track him down. As he is running away he encounters a rattlesnake who is coiled up and eventually strikes at him. He decides to hitch a ride on on a truck and is confronted by a cougar in a cage. He jumps off the truck when the cougar tries to lunge at him. There are several scenes with mild animal action. Later in the film we see a dog with a bucket in his mouth running towards the beach. At the beach seagulls are seen in the background. In a scene in the lawyer's house, we see him holding a cat and then setting it down on the floor. The cat looks up at him and then walks away. How The Animal Action Was Achieved: * The scenes with bloodhounds on leashes were achieved by the trainers dressing as policemen and leading the dogs. * The rattlesnake sequence was filmed using several single shots of the snake alone, with the trainer nearby, dressed as a policeman. Later in the editing room, the actor was put into the shots with the snake. The actor and the snake never appeared together during the filming. * For the exotic cat sequence, the cougar was in a cage and two trainers were at his side. One trainer held the long leash and the other stood on the opposite side and played with the cougar so that it looked like the cat was lunging at the actor. For certain shots the trainer doubled as the actor. A stuffed cougar was also used for part of this scene. * When the dog held a bucket in his mouth and ran from point A to B, it was cued by the trainer who used hand signals. * For the mild cat scene, the actor held the cat and petted it, then set it on the floor. The cat was filmed looking up at him and then walking off screen from A to B on the trainers' visual cue. * While filming on the beach, the seagulls provided beautiful, natural background.