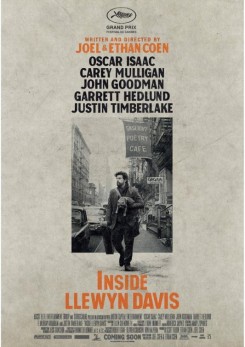 Follows a singer/songwriter as he navigates the folk scene of New York during the 1960s.

Throughout the film, the main actor has a cat performing such mild action as sitting/standing/lying, being held or petted, and walking/running. For all of these scenes, trainers used hand signals and verbal commands to cue the mild action, which the trained cat was accustomed to performing.

In the scene where the cat tries to escape out the front door, trainers were placed in separate sides of the hallway. One trainer released the cat from point A and the other trainer cued the cat to run to him at point B.

In the scene where the actor holds the cat while riding the subway, the cat was tethered to the actor. Streets were closed to traffic. In the same scene where the cat jumps out of the actor’s arms and runs through the subway car, before the actor retrieves him, the subway is a closed set with extras and actors. Trainers placed the cat on the actor’s chest then buzzed the actor, who released the cat on cue. Another trainer located across the subway car hit a buzzer which cues the cat to run to him. All extras were aware of the cat’s actions.

In the scene where the actor hitchhikes in the rain with his cat, the cat was sheltered by the actor’s arm and jacket. The cat was attached to the actor with a waist tie, which was hidden under the actor’s sleeve.

When the actor drives down the road and swerves his car to avoid hitting a dog in the road, production closed the street to traffic. This scene was shot in several takes to make it look as if the car almost hit the dog, but in reality the car never came close to the dog. The dog was never on the road during the same time as the car. After the car misses the dog, we see the dog limp across the street. The dog was trained to limp. A trainer was placed off the road, camouflaged into the brush to make sure the dog got from point A to point B.