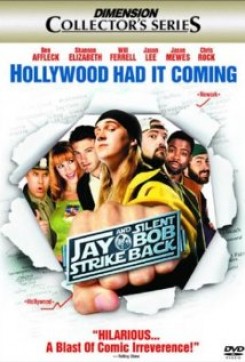 Jay and Silent Bob Strike Back

Jay and Silent Bob go on a road trip to Hollywood to try and stop a movie that they believe is being made about them. Along the way, they meet some cute girls who are on their way to a medical lab where they intend to save the animals from being tested. What Jay and Bob don't know is that it is a set up to steal diamonds from a store nearby the lab. Even though they are being played for fools, Jay and Bob rescue the animals and befriend Suzanne, a cute, lovable Orangutan.

A Great Dane sits in the van surrounded by cute girls as Jay and Silent Bob are given a lift on their way to Hollywood. The dog continues to lie in the middle of the van as the people smoke a marijuana joint. The alleged joint was a natural, herbal cigarette. The dog was introduced to all of the actors before filming began so everyone was at ease. The trainer put the dog on its mark inside the van then stood off camera holding up the dog's favorite toy to get it to look in certain directions. A computer was used to create a big grin on the dog's face.

Jay and Silent Bob break into the medical laboratory to rescue the animals from being used in experiments. The camera pans the room showing several cages and shadows of animals inside. The cages were filled with various stuffed animals and the lighting in the scene was so dark that it gave the illusion that real animals were present. Various animals exit the lab through the front doors with Jay and Bob who appear to have an animal in a bag they are carrying. The camera was set in one position and remained filming as each animal was placed separately. Each trainer released their animal and cued it to run to another waiting trainer off camera. After the animals were wrapped, the actors were filmed. Later in the editing room, technical wizardry placed everyone together in the scene. There was a motorized prop inside the bag that Silent Bob carried and when turned on, it moved and appeared as if an animal was inside.

Suzanne was played by a female Orangutan named Tango, who bonded with Kevin Smith, the actor/director playing Silent Bob. She loved to kiss him and to be carried over his shoulder - Tango's favorite way to be held. When we first see the orangutan, it sits on a log across from Jay and Silent Bob and makes faces at them. A trainer stood off camera and used hand signals to get Tango to achieve the action. One of the orangutan's favorite scenes seemed to be the one in the diner where she enjoyed a banana split with the two stars. Suzanne sat very comfortably in the booth and ate some of her split then generously shared a spoonful with Silent Bob on a cue from her off- screen trainer. Orangutans love sweets and one of Tango's favorites is gummy bears, although the banana split seemed to be an acceptable substitute.

The hug that the actor gives Suzanne was done on cue and very well received by both. When the gruesome twosome take the orangutan out of the diner, Tango is dressed in clothes that supposedly disguise her as a child. The trainer dressed Tango in the outfit that she was very comfortable wearing. After Jay and Silent Bob exit the diner, they stand on the stairs speaking to the police as the orangutan just hangs out and climbs on the railing next to them. The trainer was directly off camera supervising, but Tango was having so much fun she hardly noticed. The three walk hand-in-hand as the police begin to shoot at them. As they hurry to escape, it looks like the orangutan is being dragged by the duo, however Tango reacted to this as a game. The trainer tried to get her to walk with the actors, but it seemed she liked to drag her feet and let the humans do all the work!!! Silent Bob carried Tango on his back (which she loved) and the shots that were fired were called dust hits. These are fired by prop guns filled with small pellets that contain earth. A trained crew member shot the pellets, which make very little noise, off to the side of the set away from the action. Tango didn't seem to notice at all as she rode piggy-back style on Silent Bob.

Movies Within the Movie…

The trio runs to a sewer hole and Jay jumps down, with Suzanne following him. A big plastic cylinder was specially made and placed on top of the hole that was supposed to lead to the sewer. A special padded platform was built at the end of the cylinder where a trainer stood waiting for Tango. The actors ran to the hole with Tango where the waiting trainer called to the orangutan. On cue, Tango did a somersault into the cylinder and ended up in the trainer's familiar arms. Tango was then cued to sit on the side as the heroes followed her down the hole.

For the shots of the orangutan dangling from the edge of a sewer pipe overlooking the dam while holding Jay and Silent Bob over the edge, the camera was placed on a crane and a specially made padded platform was built. A ladder made Tango's movement to the platform easy and safe. As an additional safety precaution, a harness was also attached to the orangutan. Trainers stood on either side of the orangutan during this sequence and were able to lend a helping hand without being seen. The orangutan you see holding Jay and Silent Bob over the dam is fake. This was filmed against a blue screen and later in post-production edited together with the footage of Tango.

As Jay, Silent Bob and Suzanne walk down the road a car drives by, stops and picks up Suzanne. One trainer put the orangutan on its mark on the side of the road. As the car drove up, the actors stood with the orangutan while the trainers stood nearby just off camera, cuing the orangutan to get inside. A trainer standing off camera used hand signals to get the orangutan to achieve this action and a second trainer hid inside to assure the animal as the car moved very slowly up the road for a few feet.

Another shot shows the orangutan in a room with glass scattered all over from a broken window. Although the scattered glass on the floor looks jagged and sharp, it was fake glass that is very soft material. The trainer scattered the glass around the room and placed the orangutan on its mark.

Suzanne is placed in an air vent holding a tranquilizer gun. The trainer lifted the orangutan and placed it on its mark inside the specially made tunnel. Another trainer stood on a ladder on the other end of the tunnel and called the orangutan to crawl to him. The gun was a prop and the orangutan was very familiar with it. Then a trainer placed the orangutan on its mark standing behind the wildlife ranger, Mr. Willenholly. Tango was verbally cued to hold the gun and make various cute faces including smiling and blowing raspberries. Since the gun was fake, so was the shot that hit Willenholly!

For this sequence, a trainer put Tango in the basket of the bike that was set up on a platform where the wheels of the bike were placed on a track that moved although the bike itself never moved. This sequence was filmed in front of a blue screen and in post-production made to look like the bike flew and crashed through a window. The birds that are seen flying in the sky during this sequence were computer generated.

Planet Of The Apes Spoof

There is a segment of the film where apes are riding horses and chimpanzees are standing all around. There are two chimps that appear to be dissecting the brain of a human and eating it. The apes that are riding the horses were all experienced human horse wranglers dressed in costumes. The trainer inserted protective cloth into the ears of the horses when a gun was fired. The shots were fired off to the side, away from the animals and limited to one shot per scene being filmed. Horses that reared were trained rearing horses and did so on the trainer's cue. The chimps were dressed in outfits and placed on marks all around the set while several trainers stood off camera supervising the action. The two chimps that were dissecting the human's brain and tasting it are named Ellie and Jonah. The brain was made up of methylcellulose, which is a food additive that is added to jelly donuts to make them gel! The two chimps tasted the fake brain and didn't like it, so the trainer poured honey over the brain right before filming and the chimps loved it!

A human was dressed in costume and chased the actress around appearing to scare her. Later, Tango's trainer dressed the orangutan in a light weight black dress and placed a mask over her face which fit loosely and was held on with a piece of elastic. The trainer put the animal on its mark to lay down and the mask was removed by the actress.

Tango had no problems cuddling up to the actor or kissing him. It may have been Silent Bob's first kiss by an Orangutan, but Tango is an experienced kisser and was quite enamored of Bob.