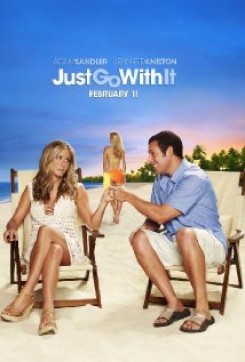 Just Go with It

American Humane Association monitored some of the animal action. No animals were harmed in those scenes. Danny (Adam Sandler) pretends to be in a sad marriage in order to pick up women at singles bars. But when one woman asks to meet his wife and kids, he must convince his dear friend and employee to pretend to be his wife in order to win over his new crush.

All grounds were inspected for hazards, and sets were closed off and secured. Chicken and Sheep When Eddie (Nick Swardson) and Devlin (Nicole Kidman) arrive at the hillbilly restaurant in rural Hawaii, cows, chickens, goats and a dog are seen milling about. For this mild background action, trainers placed food and treats on the ground and allowed the animals to graze at liberty. The area was fenced off, and trainers stood just off camera holding chicken nets as a precaution. The car that drives up was kept at a safe distance from all of the background animals. The part of the restaurant scene in which a sheep appears to be dead in the parking lot and Eddie revives it with the Heimlich maneuver was filmed using the combination of a stuffed prop and a live sheep. The fake sheep was used for the twitching leg and the Heimlich action. Trainers then brought in a live sheep for the end of the scene. Two trainers placed it on a lie-down on its mark for a brief moment and then cued it to get up and walk to a third trainer. American Humane Association also monitored some horse action, which was cut from the theatrical release. Due to late notification or limited resources, American Humane Association did not monitor some of the dog action or any of the dolphin and pig action.