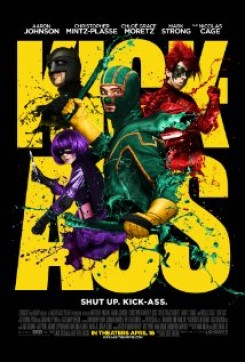 Dave Lizewski is an unnoticed high school student and comic book fan who one day decides to become a super-hero, even though he has no powers, training or meaningful reason to do so.

Although Kick-Ass shows the language "No animal was harmed in the making of this film" at the end of the film, American Humane's Film and Television Unit did not issue an official disclaimer to the film. This film is carrying an unauthorized end credit and has been contacted to remove the language from the film. American Humane Certified Animal Safety Representatives™ were unable to supervise the animal action in Kick-Ass due to the fact that it was filmed outside the U.S. and the production did not establish a contract for our oversight.

The film includes a fairly mild and brief scene with a kitten on a ledge.