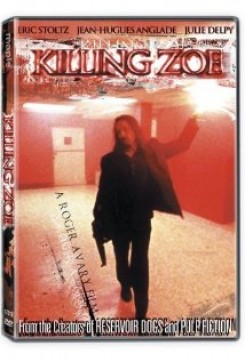 Killing Zoe, filmed partially in Paris, is a bizarre tale of Zed, an expert safe cracker, and how he finds out how much people can change over the years. Zed has been contacted by his childhood best friend, Eric, who now lives in Paris, after not hearing from him for several years. Eric has a job proposal that will entail Zed's expertise in the safe cracking department. He plans to rob the largest gold shipment in Paris. Zed accepts the job and when he arrives in Paris he meets Zoe, a high class prostitute. They spend the night together, and the next morning Eric arrives and kicks Zoe out of the hotel room, explaining Zed has more important things to do. In a very short time we realize that Eric is a very disturbed individual who, since he is a heroin addict, has contracted Aids and has no real regard for life, his or anyone else's. Eric sets his robbery plan in motion. When they arrive at the bank Zed sees Zoe and realizes that this is Zoe's daytime job! Unfortunately Eric also recognizes Zoe. He does not plan on leaving any witnesses that could identify them. One of the tellers sets off a silent alarm and the whole plan starts to go awry. We watch and wait to see what the final outcome will be for Zed and Zoe.

Animal action was limited to two scenes. In one scene, Zed walks into a house where there is a cat lying on the floor. Zed looks at the cat, then, believing the cat is dead, steps on it's head to make sure. Although this scene was in bad taste, the cat was a fake stuffed animal. No real cat was ever used. In another scene a pet monkey is seen briefly sitting in it's cage.