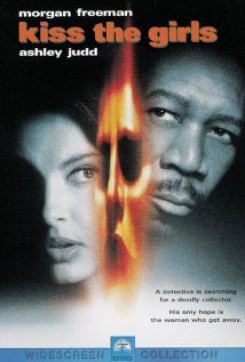 Kiss The Girls is a film about Alex Cross, a Washington D.C. forensics psychologists who travels to Durham North Carolina to investigate the disappearance of his niece. Upon his arrival in Durham, Alex discovers that his niece has not been the only woman reported missing recently. With Alex's help and the help of Kate McTieran, a young doctor who recently escaped the killers clutches, they uncover some bizarre evidence that leads them from Durham to Los Angeles and back, before finally apprehending the killer.

A fish aquarium is seen in Kate's house at the bottom of her staircase. She approaches the aquarium and turns on the light, feeding the fish before proceeding up the stairs to bed. Later, the killer is seen walking up to the aquarium and turning out the light. When Kate is running from the killer she accidentally runs into the aquarium at the foot of the stairs, knocking it over. The aquarium shatters, spilling fish and water onto the floor. The fish are seen flopping around amidst the glass and water. When the actor supposedly stumbles into the aquarium, the fish are not visible. However, after the aquarium is knocked over, the fish are seen flopping around on the floor among what is suppose to be glass and water. This scene was shot in cuts. The fish were not present in the tank when it is seen crashing from the impact. The trainer placed the fish on the floor among fake rubber glass. They were retrieved after the shot and placed back in their holding container. According to the trainer, the scene was shot only twice. American Humane was notified by the producer that there were no animals being used in the film. After screening the film and speaking with the trainer, we discovered that there was a possiblity that the fish were out of the water longer than our guidelines allow. Since we were not present to verify these facts, we are rating Kiss The Girls "Questionable".