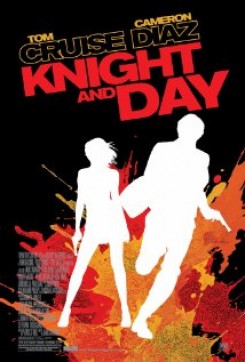 A story of a girl who gets mixed up with a spy trying to clear his name.

American Humane Certified Animal Safety Representatives™ were unable to directly supervise all of the animal action in Knight and Day due to the fact that it was filmed internationally and the production did not establish a contract for our oversight. 20th Century Fox Studios provided a pre-release screening of the film, but since American Humane could not witness all of the animal action firsthand, we have given the film a "Not Monitored" rating.

An American Humane safety representative monitored one brief scene with a dog riding in a car, which did not appear in the theatrical release. For all other animal scenes shown in the film, including an intense action sequence involving bulls, production filmed outside the United States and did not establish a contract for American Humane's oversight. For international productions, the monitoring process involves a contract and a fee for services,  whereas our services on Screen Actors Guild (SAG) and American Federation of Television and Radio Artists (AFTRA) domestic productions are covered by grants from those organizations. Footage of men hitting the bulls with sticks on the set of this production has appeared on YouTube. American Humane finds that action in the posted video unacceptable.

If an American Humane safety representative would have been on set in Spain, where the bull scene was filmed, the apparently abusive behavior would have been prevented. American Humane, when present during production, can work to ensure that the animals receive a high standard of care, reassure the public that all went well on set, and defend the film from erroneous criticism. In the case of Knight and Day, we were not there, but we find the treatment of the bulls depicted in the behind-the-scenes video a gross violation of the high standards we set in our Guidelines for the Safe Use of Animals in Filmed Media.

You can speak up for the animals! Let New Regency Pictures, the production company, and Twentieth Century Fox Film Corporation, the movie's distributor, know the treatment of the bulls in Knight and Day is totally unacceptable, and tell them you want American Humane on the set of their productions -- wherever in the world they are filmed -- to ensure the safety of animals. Take action now.