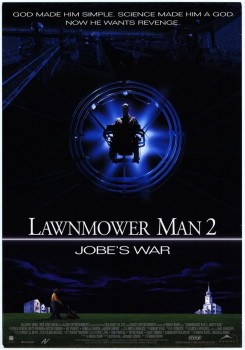 Lawnmower Man II: Jobe's War is a low-budget fantasy thriller set in futuristic Los Angeles and the Hawaiian Islands, both of which have become a Virtual Reality World. Simplistic special effects abound as the simpleminded Jobe, a man who mows lawns, is turned into a genius.

The latter is accomplished by a greedy and opportunistic businessman, who wants him to access all super highways of information throughout the world by up-linking into the data bank for Personal World Power.

This constant flow of information to Jobe makes him a monster who has plans for his own world dominance. Trying to stop him are four teenagers and a scientist, who initially built the computer chip that made it all possible.

The animal action is minimal, dealing primarily with a dog that performs his natural behaviors on cue from his trainer. Although many of the scenes were simple, they required as many as ten takes due to technical difficulties, and not the dog. Many times the dog is in the arms of one of the actors. Most of the action with the dog simply called for the animal to run from point A to point B.

One of the few complicated sequences in the movie called for the dog to sit in a chair, bark at the actors, then jump to another chair and put his paws on a desk to pick up a plastic disk with his teeth. The trainer, who was off camera, gave the dog hand and verbal cues. There were four rehearsals and three takes for each of the afore-mentioned behaviors.