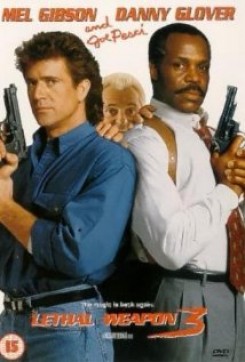 Whoever said, "You're not getting older, you're just getting better." must have had police partners Martin Riggs and Roger Murtaugh in mind. The easy humor and warm interplay between this duo just improves with age making this fast-paced, comedy-action sequel every bit as good as the first. Riggs and Murtaugh arrive at the scene of a large office building that has been hastily evacuated due to a bomb threat. Riggs wants to find the bomb, but Murtaugh wants to play it safe and wait for the bomb squad, as he's just a week away from retirement. Riggs won't wait and rushes into the building with Murtaugh reluctantly following. They locate the bomb in a car and have just minutes to defuse it. Again, Murtaugh pleads with Riggs to wait for the bomb squad, but Riggs proceeds to cut wires. Unfortunately, Riggs clips the wrong wire, and with seconds to spare, they scramble out of the building, scooping up and saving a cat in their dash to safety. They are barely out of the building when the whole place blows in a spectacular explosion. The dynamic duo are busted to cops on the beat, where they waste no time finding an armored car robbery and become involved in a high speed chase. They arrest Billy Phelps who has a gun containing special red-tipped bullets called "cop killers" because they can pierce a bullet-proof vest. Before Billy can be questioned, he is murdered by a man impersonating an officer. Lorna Cole of Internal Affairs takes over the case and Riggs and Murtaugh are reinstated to sergeants to work on it with Lorna. The murderer turns out to be a former top cop who went bad. When Riggs arrested Billy he stumbled upon something that the Police Department was trying to keep a lid on. Fifteen thousand confiscated weapons were stolen from a police storage facility before they could be destroyed and they're headed back onto the streets unless Riggs, Murtaugh and Lorna can stop them. Riggs finds romance with Lorna and plenty of predicaments to escape in his own spectacular style.

The exciting opening scene where Riggs and Murtaugh run from the building moments before it explodes, with the cat in their arms, was filmed in cuts. Both a real and a fake cat were used. The real cat was not present during the actual explosion. While Lorna and Riggs are snooping inside a warehouse building, they come face to face with a snarling guard dog. Lorna appears terrified but Riggs lowers himself to the dog's level and proceeds to charm the ferocious Rottweiler. Riggs growls and whines, speaking in his version of dog language. It works, and soon the dog is licking Riggs' face. After Riggs and Lorna are discovered by the villains, they make a quick getaway in a pickup truck. With Lorna behind the wheel, she speeds to Riggs' rescue, and he jumps into the back of the truck. Not wanting to be left behind, the dog pursues the truck. As they escape in a hail of gunfire, they slow long enough for the dog to jump into the back of the truck and they speed away. This scene was shot in cuts. The dog ran about 25 feet on the street before jumping to the bed of the pick-up truck. One trainer released the dog and gave verbal commands to the dog, who ran to a second trainer who was hidden behind a box in the back of the truck. Once the dog was in the back of the truck, the truck went about 35 M.P.H. A trainer was hidden in the back of the truck, holding the dog securely with a disguised leash attached to the dog's collar. A second trainer was riding in a car behind the moving truck giving hand signals and verbal commands to the dog. Riggs takes the dog home, where he becomes Riggs' pet. Other animals seen briefly are a pet dog of Murtaugh's and another dog on a leash. Pigeons on a city sidewalk are also seen. As has become his custom, the producer and director, Richard Donner, has a subtle animal rights message in his film. In a scene taking place in a police locker room there is a sticker on a locker that says "Fur is Dead". Bravo, Mr. Donner!