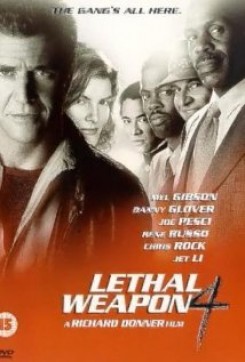 Lethal Weapon 4 is the continuing story of Riggs and Murtaugh, two police detectives that don't go by the book, but they always get their man

There is a scene where an animatronic shark is lying in a boat flopping around and later, its fin is poking out of the water as it supposedly swims around the boat after it has tipped over.

In another scene, Riggs two pet dogs, walk around in his trailer, eat some French fries, and walk A to B across his deck. The trainer placed the dogs on their mark and cued them with verbal and hand signals.

Other animal action consists of some birds in a cage on the roof of a building and sea gulls in a parking lot.