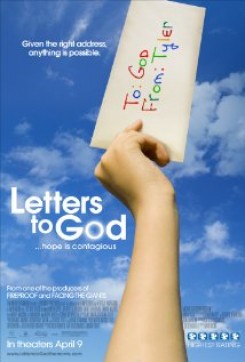 “No Animals Were Harmed”®To cope with cancer, a young boy writes letters to God, and the mailman helps his message get out and inspire a community.

A dog performed such mild action as rolling over, chasing and knocking down a mailman and putting its paws on a parked mail truck. Trainers used hand signals and verbal commands to cue the action, which the trained dog was accustomed to performing. The dog was cued to put its front paws on the mailman and stay while the actor fell in a choreographed fall -- all of which the dog found fun and playful. For the shot in which the dog bites the mailman’s leg, the actor was replaced with a costumed trainer and a rubber object was hidden under the trainer’s pants, which the trained and rehearsed dog was cued to “get.” The barking and growling was added in post-production. For the scene in which the dog puts its paws on the mail truck, a ramp with a platform for the dog to stand on had been placed next to the door, and the dog was cued to walk up it and paw the door. All grounds were inspected for hazards and sets were closed off and secured. Cast and crew members were introduced to the animals and instructed on their proper handling before filming began.