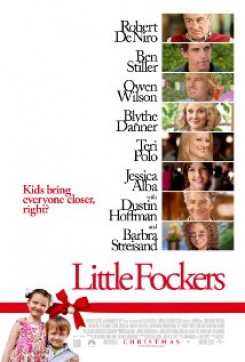 Greg Focker (Ben Stiller) and his wife prepare for their twins’ birthday party while dealing with Greg’s paranoid father-in-law, who thinks Greg is having an affair with his flirty young sales rep at work.

The Focker family has a pet cat named Jinx, which is seen performing such mild action as sitting in a chair or on a bed, being held, and walking or running from one point to another. For all of these scenes, trainers used hand signals and verbal commands to cue the trained cat in these behaviors, which it was accustomed to performing. The cat’s "hissing" was also a cued behavior.Jinx jumps out of a cat carrier and into Jack’s (Robert De Niro) arms. This scene was filmed in separate shots. For the jump, a cat trained in jumping was placed in the carrier and cued to jump a short distance onto the actor’s shoulder. Trainers stood nearby to catch the cat in case it fell. For the second part of the scene, the well-rehearsed actor simply removed a different cat from the carrier and held it.For the scene in which Jinx and the family lizard (a bearded dragon) meet nose to nose at a birthday party, both animals were equipped with waist ties held by trainers. A stuffed prop lizard was used for part of the scene, and the cat’s close-up was filmed without the lizard present. The animals were never allowed to get too close to each other, and the cat was extremely well-rehearsed.In part of this scene, the lizard’s tail hangs out of the cat’s mouth and wiggles. This lizard tail was a special prop with a mouthpiece on the end that the cat could place in its mouth. Trainers cued the cat to "get it" and then go from one point to another.Greg grabs the cat and gives it the Heimlich maneuver, causing the lizard to fly out of the cat’s mouth and onto the grass, where it is picked up by a child. This scene was filmed in separate shots. Trainers cued the cat to run past the actors as the well-rehearsed actor gently grabbed the cat and pantomimed the Heimlich maneuver. The actor was very gentle with the cat. A stuffed cat prop was also used for part of this scene. The lizard that flies through the air was also a prop. The live lizard was equipped with a monofilament line around its waist and allowed to run forward a few feet on the grass before being gently picked up by the well-rehearsed child actor.Just as in the Heimlich scene, the child actor was very well-rehearsed on all the lizard scenes and knew how to handle the animal gently and cautiously. He was very careful about holding it in his arms, in his front shirt pocket and in a napkin on his lap. Trainers stood nearby for all of these scenes, which were all filmed on an enclosed, secured set. For the scene in which the lizard walks on the dinner table, the lizard was filmed briefly walking a few inches at liberty and retrieved right after. The dinnerware on the table was plastic.ChickensThe chickens seen on and around a stage as Bernie (Dustin Hoffman) learns to dance were brought to the set by trainers and allowed to do whatever came naturally. This brief scene took place in an enclosed area. The actors were well-rehearsed and used caution near the birds.