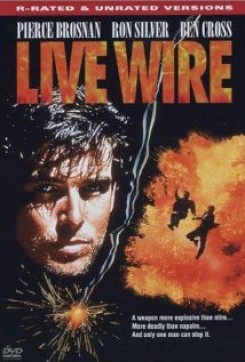 Live Wire is an exciting and suspenseful action melodrama set in our nation's capitol. When a senator mysteriously keels over and dies in a restaurant shortly before the place explodes, Danny, an F.B.I. bomb expert, is brought in to investigate. The senator heading the murder investigation is Senator Traveres, who is having an affair with Danny's wife, Terry. This creates a strained relationship between the two men. Danny has been separated from his wife since their young daughter drowned in their backyard pool and their marriage ran into difficulties. A second senator is killed in an explosion, but the sabateur's plot backfires when the hitman is apprehended. As the hitman is brought before a judge in a crowded courtroom, the judge suddenly becomes ill and keels over. Danny barely clears the crowded courtroom before the judge ignites, turning the place into an exploding inferno. It seems that terrorists are using a mysterious new form of explosive energy and are blackmailing corrupt politicians. These politicians had sponsored an arms deal and pushed the bill through Congress. Senator Traveres was the third sponsor of this bill and he's become a marked man. Danny is determined to stop the terrorists and win back his wife.

Animal action is minimal and is limited to a parrot on a perch seen briefly inside a mansion and Danny's family dog, a beautiful Golden Retriever. In a flashback scene where his daughter has fallen into the pool, the dog alerts Danny to her plight by standing alongside the pool and barking.